Elizabeth and The Catapult Interview with Elizabeth Ziman 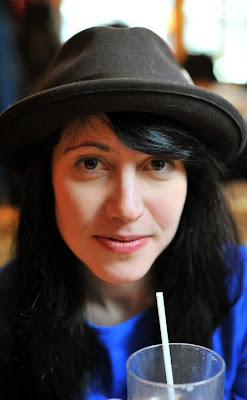 My interview with singer/songwriter Elizabeth Ziman of Elizabeth and the Catapult. For the latest on Elizabeth, including tour dates check out the website listed below
http://www.elizabethandthecatapult.com/

You have been pretty busy lately with a bunch of touring. How was the SXSW experience?
It was as overwhelming and overstimulating as it usually is this year, but unlike recent years, this year I actually got my act together and saw some great music instead of running around like a chicken with my head cut off and only seeing really mediocre music. So I felt way more satisfied at the end.
What about the Sara Bareilles shows?
They were amazing- her audience was delicious, and Sara is through and through one of the nicest people I've ever met. So this tour was like a walk in the park.
For people that haven't seen you live, what can they expect to see when they come to see you live?
Don't get angry if we play too many new songs all the time, it's the only thing that keeps me interested. Also expect a good heavy dose of cornball jokes, I get it from my dad.
Who are some people that you have looked up to in the past, in terms of stage presence and live performance?
I adore St Vincent, David Byrne and Nina Simone. I just discovered an up and coming new york act last night at Rockwood Music Hall- her name is Becca Stevens, and she's been really pushed by NPR/ Brad Mehldau and I think people are starting to perk up. I was absolutely blown away by her performance.
How does the writing process normally pan out for you? Do you write continuously?
When I'm not writing, I'm not happy, so I try to do what's good for myself. But yeah, I usually write the lyrics first, on a napkin or a receipt depending on where I am, and then I run home and flush it out on the piano or more recently, the guitar.
How would you say the writing/recording process for , "The Other Side Of Zero," differed from your previous(super broad question)? Did you approach it in a different light?
I wrote the whole thing really quickly over the course of two month long tours...most of the lyrics were written in the van. I was also going through a "thing" so most of the album is about that "thing". I think that also tends to happen when you churn it out so quickly.
I know that choosing your favorite song on an album can be like choosing your favorite child, but what song(s) were you most proud of how they turned out on "The Other Side Of Zero?"
One of the songs "Thank you For Nothing" is definitely not a quote on quote hit single, but I believe it to be my best song. I was listening to a lot of Bob Dylan's track "Don't think Twice" when I wrote it and I think it has a lot of the same humor and darkness. That dichotomy.
Were their any particular artists that you were listening to while writing/recording the record, that may have influenced its sound?
Always Nina, but yes I was listening to a ton of Bob Dylan and Leonard Cohen. Also dabbles of Sufjan and St Vincent. But I shied away from my cinematic orchestrated tendencies on this record a bit----next record is probably going to be way more arranged in that way.
Can you briefly describe the inspirations behind "Go Away My Lover" and "Do Not Hang Your Head," and how they came together?
Go Away my Lover was produced by my friend Alex Wong who just toured with us as a drummer on the Sara B tour---he's a very multi-talented man. Do Not Hang Your Head was a fresh experience for me in terms of recording because I let go a little and let my friend Rob Moose do the haunting string arrangements. It's usually hard for me to trust someone enough to let them do the strings when I already here something in my head, but I knew I had a lot to learn from Rob.
Over the past several years, you guys have put out some fantastic music videos(Perfectly Perfect, You and Me, Race You, Taller Children, etc.). What are some of your all-time favorite music videos?
I love Chris Isaak's Wicked Game- also the video for Johnny Cash's Nine Inch Nails cover was pretty amazing....
I read that you are friends with Esperanza Spalding, and she even played bass on your first record? How pumped were you when she beat out the little guy in purple for best new artist this year at the Grammys?
I was totally freaking out. It was probably one of the best moments of my life. I was eating (of course) and I literally through my sandwich at the wall when they announced it. A bit messy really.
What kind of advice would you have for an artist/band just starting out?
You need to grow really thick skin. And perform and play as much as possible. Never stop.
How important do you find social media/networking? I hate to say it, but I really do love facebook.
Perfect day, driving in your car with the windows down, what are you listening to?
Well, unfortunately I can't drive. But the ultimate 2011 summer jams are definitely off of Blake Mill's new CD "BREAK MIRRORS". And song in particular, "Hey Lover".
What do you have coming up next? More touring?
I'm touring with Harper Blynn this month and Lenka in June.

Posted by Mousertime Music And Stuff at 4:02 PM