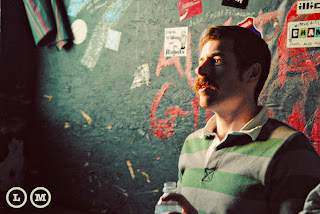 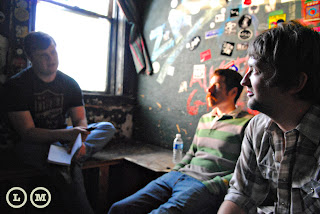 Posted by Mousertime Music And Stuff at 9:28 PM No comments:


I first heard this band play, when they were the opening act for Anberlin last fall. After the show I went back to their merch table, where all four members greeted me as purchased their latest EP. The guys were equally excited about me purchasing the record, as I was listening to it. I was really impressed that the guys were as energetic off stage as they were onstage, which is a huge rarity these days.
With the March release of their highly anticipated album, "Sister of Mine," Marksmen are quickly gaining more and more recognition. I litterally have not been able to stop listening to this album for the past month. Matt Segallos' perfectly unique voice, floating guitar riffs of Christopher Brickman, paired with the strong and steady rhythms bassist Glen Espinoza and drummer Reed Murray absolutely blow me away. The best part is that they have more music in the works! For the latest news on Marksmen check them out at http://www.facebook.com/#!/MarksmenBand

Acoustic version of "Brooklyn":
Marksmen is:

Trevor Dahl (a.k.a. Plug In Stereo) has gained a great deal of recognition in a short period of time, by hitting the road hard,touring with acts like Never Shout Never, the Ready Set and the Scene Asthetic. Dahl also has a knack for creating catchy acoustic pop songs, driven by clever lyrics and his unbelievebaly smooth voice. His debut full length, Nothing to Something," dropped earlier this month and will have you humming along in no time at all. Check him on tour with Secondhand Serenade right now!
http://www.myspace.com/pluginstereo

I got the chance to catch up with Mayfield before his album release party in Atlanta, and discuss the new album in-depth....

Posted by Mousertime Music And Stuff at 5:01 PM 3 comments: 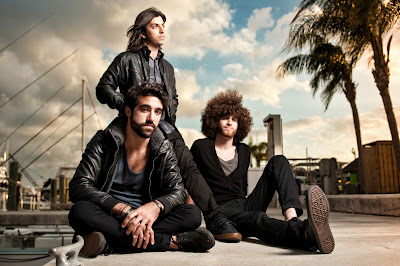 With constant touring and over five hundred shows under their belt, Miami based progessive pop/rock trio, Jacobs Ladder is back with a brand new EP. "Back to Life," released indepently by the group, provides listeners with the perfect soundtrack for their summer vacation. Jacobs Ladder's new album will have you wanting more of their unique sound, immediately. I had the chance to speak with vocalist/guitarist, Oren Maisner about the bands latest EP...

With your new Ep, "Back To Life," what were some things that you approached differently in comparison with your previous works?
We set out to craft catchy hard hitting songs with integrity. We really wanted to produce a tight EP where all the songs had their proper place and feel. We invited and welcomed different styles into the writing process that we previously had never tried before, such as ballads, R&B grooves and pop/punk breakdowns. We pump up listeners on our up-tempo rock driven title “Back To Life” but then on "Enchantment" the listener gets a sense of romance.
How did the writing process pan out for this record?
Portions were conceived before we were of drinking age & others we joined forces for in the van. Mostly our dueling acoustic guitars and "morning voices" evolved into multiple choice options with electric guitars and drums in our warehouse. We all play guitar and write, which gives us common ground. We start with the riff, Sammy and I then get together and write vocals. Brian plays a big role in the transitions and rhythms.
We ended up recording 15 songs and then picked 5 with our management team to record with Carlos de la Garza in LA. Carlos helped us really match everything up sonically and challenged us to make every part as full as we could.
What attracted you to the idea of working with Carlos de la Garza? What were some specific things that he brought to the table?
Carlos worked with Mark Trombino for many years, who we’re big fans of. Bleed America and Dude Ranch are two of our favorite records.
Working with Carlos we wanted to achieve that "punch you in the face with our guitar while serenading you" sound. He ended up being a super rad dude. He had great ideas, and challenged us, but never made us do things that we didn’t like. That was in itself really nice... Everything just felt right.
What would you like for people to take away from this record?
A sense of fulfillment mixed with a yearning for more. When the listener finishes hearing the EP we want them to feel like they've spent the summer with a new lover who is everything they've dreamed of and the thought of summer ending is killing them! With this record we intend to invoke excitement, joy, a touch a sadness and most of all optimism. We built this band from ground up and we finally feel like the product we've created represents us fully.
How supportive has your hometown crowd been?
Our hometown crowd is everything to us. They keep us on our toes, and make us always want to step it up a notch.
Everyone in our South FL scene has always been behind every tour we've embarked on as well as every record we've put out. We love our hometown and feel we owe it to them do our part in generating as much of a scene as we can.
A bunch of great bands have come out of the South Florida area, who are some of your favorite local bands?
New Found Glory, Poison the Well, Torche and Dashboard Confessional. There’s also lots of up and coming bands like Capsule, Rachael Goodrich, and Arboles Libres.
What can people expect when they come to one of your shows?
We all have the instinctive nature to be aggressive performers. We like to be in your face and dripping with sweat. It’s how we express our music. Expect to have fun, to dance, and fall in love.
Who are some bands that you have looked up to in terms of stage presence and live performance?
We've always been adamant believers of energetic live shows. Bands like At The Drive In, Dillinger Escape Plan, and Foo Fighters, are huge inspirations.
Being veterans of the road, what is some advice that you would give to newer bands?
Get out and do it, be smart, don’t waste money on hotels. Meet people and sleep at their houses. Save money by going grocery shopping and not eating fast food. You never know what the next city has waiting for you. Change those strings and warm up those voices. Also E-mergency and Aloe Vera are life savers.
Perfect day, windows down, driving in your car what are you listening to?
Mae "Beautiful Destination". There’s just something so raw and relaxing about the record.
Posted by Mousertime Music And Stuff at 9:19 PM No comments:

He Is We Interview Part 2 (Rachel Taylor and Trevor Kelly)

I recently got to catch up with Rachel and Trevor of He Is We, while they were on tour with The Scene Asthetic, Carter Hulsey and Plug In Stereo....
Check out there latest music video at http://www.youtube.com/user/HeIsWeVEVO