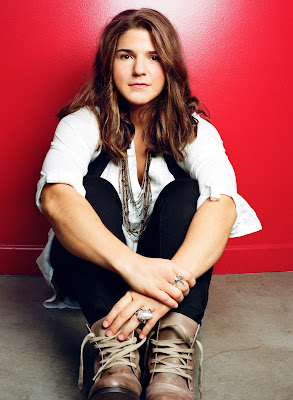 Recently I have really been getting into a singer/songwriter by the name of Daphne Willis. Her latest album, Because I Can, perfectly showcases her honest writing and soulful sound. Check out my interview with her...
For the latest news on Daphne, check out http://daphnewillis.com/

You have a ton of shows coming up, how have they been thus far?
The shows are great! We've been playing all different styles of venues... listening rooms, bars, bigger venues, and house concerts. I actually think I enjoy the acoustic unplugged shows we do in peoples houses. The energy and level of connection is just incredible :)
How was the SXSW experience?
SXSW? Was I even there? LOL. I love SXSW!!! It's always so crazy and you pack as much as you can into such a tiny little slot of time. Blur.
What can people expect to see when they come out to one of your shows?
It totally depends! I have different configurations and different people that I perform with regionally. Usually I'm travelling and performing in an acoustic trio configuration. We rock it out though ;P It also depends on what kind of venue we are playing.
Specifically, how did "I Will Be Waiting" come together?
I wrote I will be waiting with a couple of friends of mine in Nashville. Hunter Davis and Chris Faulk. At the time I was in a relationship and traveling a lot, as I am now. When you're in either a long distance relationship, or in one where one person is traveling a lot, theres always this constant sentiment of waiting for something, or missing something. We wanted to write a song that really captured that emotion, so we wrote "I Will Be Waiting."
Your LP, Because I Can, has been getting great reviews. What would you like for people to take away from this album?
When I listen to music, I love to feel inspired or motivated. I just want this record to put some smiles on some faces, lighten some moods, and maybe create some thoughts of motion for some people. If nothing else, maybe it'll be great driving music ;)
How did the recording process pan out? How did it differ from your previous experiences in the studio?
I did this record with Tim Lauer in Nashville. We had a blast! I think the main difference between the two records was really just location. We tracked a lot of the first record in Chicago, all of this record was done in Nashville. I think I also the fact that I started doing some co-writing really changed the process as well.
You have a couple of features on the album, including Trevor Hall on "Circumstances" and Megan McCormick on "Weatherman." How did they get involved with the songs?
They have been friends of mine for a long time. Megan and I wrote "Weatherman" together, so it just felt right having her on.
With such a soulful sound, I am curious who you listened to growing up?
I listened to TONS of Stevie Wonder growing up. Lots of Motown and jazz as well.
How important is social networking/media to an artist like yourself?
I think being a young artist, in any genre, you have to be willing to embrace the social media beast that is modern pop-culture. But the cool thing is that it has become so diverse, that you can really make it your own and have fun with it :)
Perfect day, driving in you car with the windows down, what are you listening to?
Micheal Jackson!!!
Posted by Mousertime Music And Stuff at 4:11 PM