Stephen Kellogg and the Sixers Interview 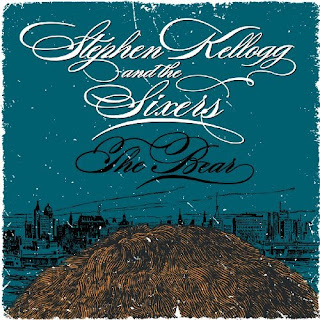 About two weeks ago I went to see a show at Center Stage in Atlanta and one of the opening acts blew me away with their performance. That band was Stephen Kellogg and the Sixers. Since then I have been listening to them nonstop. Every hook on their newest album "the Bear" is incredible, so you should most definitely go check them out right now at http://www.stephenkellogg.com/home.shtml. I had a chance to speak briefly with Stephen about inspiration and memories...

So you have been touring the nation with Needtobreathe...how has it been so far?
WE JUST FINISHED THE FIRST PART BUT WE STILL HAVE THE WEST COAST AND SOUTHWEST TO LOOK FORWARD AS WELL AS A FEW MORE MIDWEST STOPS...WHICH WE'RE THRILLED ABOUT BECAUSE I HOLD NEEDTOBREATHE IN THE HIGHEST REGARD AS MUSICIANS AND AS PEOPLE. I'M INSPIRED NIGHTLY BY THEM.
I love the new album "The Bear" and I am curious as to how you approach your writing process as a band?
IT'S ALL ABOUT FINDING THE SONGS, LETTING THEM GET OUT, NOT BLOCKING THEM, TAKING THE TIME TO HEAR THEM AND MAKE SURE THEY'RE AS GOOD AS THEY CAN BE. WE HAD A BUNCH OF SONGS THAT WE WROTE TOGETHER, SITTING AROUND THE LIVING ROOM TALKING ABOUT WHAT IT IS WE WANTED TO SAY. THE LYRICS ARE THE HEART OF ALL THE SONGS WE MAKE...
What makes this album stand apart from previous albums?
ONE OF THE BIGGEST DIFFERENCES IS THAT WE STAYED WITH IT MORE. WE FELT THAT THE RECORDINGS WERE CLOSER TO WHAT WE ACTUALLY SOUND LIKE (OR AT LEAST FEEL LIKE) AS A BAND. THERE ARE SOME VERY ORGANIC MOMENTS ON THE BEAR...AND THE PROCESS OF MAKING IT AND WORKING BEYOND DEADLINES, JUST CAUSE WE FELT IT WAS THE RIGHT THING TO DO, ETC...THAT TOOK A NEW LEVEL OF DISCIPLINE (WE HAD MADE THE RECORD BEFORE IT IN LESS THEN 2 WEEKS)...
What was the inspiration behind "Oh Adeline"?
SHE'S 2 AND A HALF AND CAN STOP MY HEART WITH HER SMILE.
I heard you guys were recording in various studios for the future album, any particular reason for that? Trying to capture different types sounds, or are you just trying to find the right home to make your next album?
THE LATTER...JUST LOOKING FOR THE RIGHT SITUATION TO MAKE ANOTHER RECORD. YOU NEVER HAVE ANY IDEA WHAT ANYBODY IS GOING TO THINK ABOUT WHAT YOU DO-GOOD OR BAD...SO WE ARE JUST LOOKING FOR THE RIGHT 'SITUATION' WHERE WE'LL HOPEFULLY BE BEST SET UP TO MAKE MUSIC THAT TOUCHES PEOPLES HEARTS.
You all put on such a fun show. Are there any performers that have influenced your act, or that you have modeled yourself after?
THIS WILL PROBABLY BE HARD TO BELIEVE, BUT IT REALLY IS A COMBINATION OF 80'S METAL ACTS (WHITESNAKE, TESLA, CINDERELLA)MIXED WITH ROOTSIER ACTS (,TOM PETTY, JOHN PRINE, RYAN ADAMS)THEN MIX IN SOME GRATEFUL DEAD OR ANY BAND THAT TOTALLY VALUES THE EXPERIMENTATION. I KNOW IT DOESN'T ALWAYS MAKE FOR THE 'TIGHTEST' SHOW, BUT IT KEEPS IT REAL...AND I DON'T KNOW..THATMIGHT BE ONE OF THE BIGGEST ASSETS WE HAVE GOING FOR US.
So you are preparing for your 1,000th show, which is an awesome accomplishment! Can you share at least one crazy prank story or fan story that was memorable?
THIS ISN'T CRAZY, BUT IT WAS FUNNY. MY MOM WAS MOVING AND ASKED THAT I COME BY TO GET SOME THINGS OUT OF THE BASEMENT.I FOUND ALL THESE SUPER DATED VESTS THAT I HAD WORN IN HIGH SCHOOL...I SAID TO GOOSE 'LETS WEAR THESE TONIGHT." (WE WERE PLAYING THE ELECTRIC FACTORY IN PHILLY AND THERE ARE REALLY BIG SCREENS ON THE SIDE OF THE STAGE THAT DO CLOSE UPS). LIGHTS GO DOWN TO GO ON AND HE GOES ON STAGE, I SLIP RIGHT OUT OF MINE SO HES STILL WEARING THIS GOOFY VEST AND OH MAN I WAS LAUGHING SO HARD I DON'T THINK I GOT A FULL LINE OUT IN THAT FIRST SONG.
Posted by Mousertime Music And Stuff at 7:06 PM

Labels: Mousertime, Stephen Kellogg and the Sixers, The Bear