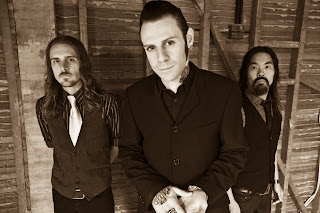 Thousand Watt stare is a band consisting of Christian Martucci on vocals and guitar (formerly of Black President, The Dee Dee Ramone Band and The Chelsea Smiles), Pat Kim on bass (Unwritten Law) and Dylan Howard (Unwritten Law) on drums. The band came together when Christian reached out to Pat about potentially working on some songs he wrote. Pat then brought in Dylan, and soon the guys were in their friends basement recording what turned out to be their debut Ep.  I had a chance to speak with Thousand Watt Stare's frontman, Christian Martucci...

For the writing of the album, did you guys come together and collectively create them? Or were the songs pre-TWS?
Christian: I've had the songs on the EP kicking around for a little while. They weren't really anything that would work with The Chelsea Smiles or Black President. I made some home demos of them with a drum machine and sent them to PK one day. Next thing you know, we're in a rehearsal room with Dylan. It happened so fast. I'm happy to be doing this with them and will definitely welcome their ideas with the new stuff.
I heard that all of the recording for the album took only one day? Was that just how it worked out?
Christian: Yeah pretty much... We just went in, set up our stuff, and it sounded perfect. We only spent about an hour getting the right sounds. We recorded each song twice, picked the best take and moved on. We could have taken as much time as we wanted in there but just didn't need to. The sound was just there and more important, the vibe... It's the fastest recording I've done in years and probably the best. We had a blast in there.
Hardline Records is putting the record out, how did you guys get hooked up with them?
Christian: Ken Seaton managed Black President and we always got along great through all the ups and downs of that band. He called me up and told me about a studio he was building in his garage and asked if we'd like to come down and record a few songs. When we were in the middle of the session he told us he wanted to put it out. Knowing how hard it is to find someone you can trust with your music, we immediately said yes. It made perfect sense. He manages us, records us, AND puts our records out. It's a no brainer. At the end of the day Ken is just a good dude and into it for all the right reasons.
What would you say this project brings to the table, that maybe other projects didn't?
Christian: I think this band is more diverse. My previous bands were definitely more genre specific. Thousand Watt Stare to me is a mixture of all the different styles of music I love. We just play whatever we want and there's no one there to stop us. It's the happiest I've ever been in a band.
Who are some guys that you have looked up to in the past as far as stage presence/live performance goes?
Christian: So many. It all depends on the mood I'm in. Glenn Danzig has always been a huge influence on me... Stiv Bators, Michael Monroe, Iggy, Alice Cooper, Muddy Waters, Hank Williams, The Ramones. I could go on for days. The old stuff is truly what speaks to me. If Hank Williams tells me he's having a bad day, I believe him.
After the album drops November 16th, what's next for you guys? More touring?
Christian: We are going to play as much as possible for now. Our next move will be to record a full length and hit it hard.
How important is social networking for you guys?
Christian: Probably not as much as it is for some bands. We're honestly just doing this because it feels right. It's not about how many people like us on Facebook or any of that stuff. For us the most important thing is making music together.
Riding in your car, windows down on a perfect day, what are you listening to?
Christian: Chuck Berry
Posted by Mousertime Music And Stuff at 3:37 PM