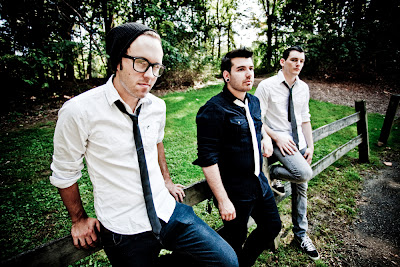 How did you guys come together in the fall of '09?
Tony: Dave and I have played in bands for years. In the Summer of 2009 I was working on a solo project and it slowly turned into Dave and I writing music. We started looking for people and slowly but surely the band started.
Dave: After being on a year long hiatus from playing in a band I was extremely excited to get the project off the ground. Tony and I had sat down for countless hours discussing what direction we wanted to move in, what we wanted to portray as a band, and goals for the coming months. Our most important discussion was about sticking to our guns and writing music that we loved and that was true to our hearts, we both agreed that the new members would also have to be on the same page.
How did the writing process come together for "Salvation In Secrets"?
Tony: It was really just started off with me writing songs at my house and sending them to the guys and them learning them and Dave putting vocals over them. It was really all the band knew at the time. We then sat down for about a month or so and starting producing the record before we went in to record it. I was really happy with the product we made.
Dave: The writing process on the record was somewhat trial and error. We were five guys from different backgrounds learning to work together. I really have to give Tony a lot of credit for pulling a system together that worked for all of us. This was my first time as lead vocalist in a band so I had a lot of learning to do. After putting in endless hours of hard work and late nights up I myself grew into my own and began writing melodies and lyrics that I am extremely proud of.
Was there anyone specific specific that you were listening during the writing/recording process that you could have credited as inspirations?
Tony: On Salvation there was all sorts of bands we can credit. Both Dave and I were for the first time listening to mostly the same records. We were listening to a lot of Lower Definition, The Receiving End Of Sirens, Anberlin, Ivoryline. Of course we were listening to many other band and different types of music found inspiration from all sorts of bands.
How did the recording process pan out for you guys?
Tony: It was very quick. We did 5 songs in 6 days. It was very fast pace and I ended up doing all the guitar and bass on the record. By day 4-5 I was getting a little burnt out but I loved every second of it and hearing our songs come to life is really like watching a baby grow. It's such a good feeling when the songs are finally done.
Dave: The recording process for me was awesome. As you can imagine, this being my first time as lead vocalist, there was a lot of anxiety and nerves walking into the studio. I had three songs completed in their entirety, but still had two to write; one of those being "The Getaway" which is the single off the record. I began tracking on the 4th day of recording and was pleasantly surprised and pleased with my performance and the overall outcome.
How was it working with Rob Freeman? How did you guys get hooked up with him?
Tony: Two Words. Amazing Producer. He finds what it is in your band that makes you, you and he brings that out 100% He is such a talented guy and I would go back with him to record another record. We got hooked up with him from our new drummer Jeff, who was friends with our old guitarist Justin. His old band recorded there and suggested it to us. It was a great call for sure.
Dave: Recording with Rob Freeman seemed like a huge step in the right direction for both me and the band. Rob is an amazing producer and really knows what he was doing. It was great working with a legitimate producer for my first time in the studio as lead vocals. I learned a lot and the day we left I walked out with a whole new outlook.
I heard you guys are already working on your next release? Ep? Lp?
Tony: Yes, we've been hard at work for the last three months and the record is coming out so sweet. We are all really pumped to finish our next release :)
Have you been approaching the writing differently for this next release?
Tony: It's not so much myself anymore, Its the band as a whole. It's been incredible being able to work with such a talented drummer Jeff and Dave has been incredible in the pre-production of this new record. I feel like this new record is us, 100% who we are and it's true and I can't wait for the world to hear this record.
Any bands/musicians that you are really into right now?
Tony: Acceptance, Circa Survive, Funeral For A Friend, and Explosions In The Sky
After the new record is done, are you guys planning on hitting the road hard? Any details yet?
Tony: Tour, Tour, Tour !!!No details yet but we should be booking some definite shows soon
How important would you say social networking is for you guys?
Tony: Huge, Huge, Huge, Huge, The Internet is so big these days. It's the ultimate way to get your band out there. You just need to find a way to get it all over the Internet.
Perfect day, driving in your car with the windows down, what are you listening to?
Tony: Right now, Acceptance!
Posted by Mousertime Music And Stuff at 7:00 PM