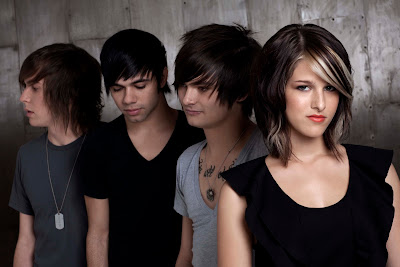 Hey Monday has certainly made their mark in the pop/rock genre by creating some incredibly
catchy music and hitting the road hard. The band is currently touring on Warped and are preparing for their upcoming album release Beneath It All which comes out August 17th on Columbia Records. When their first album Hold On Tight came out, their first single "Homecoming" managed to find itself on several of my mixes. I have always been a sucker for a rock group fronted by a female singer with great vocal range (just take a look at some of my previous interviews ie. Fireflight, Meg and Dia, Poema etc.). I am very excited about their future release, as it tackles more mature topics and showcases the growing musical talent of the group as a whol.This week I had the chance to get some questions answered by the very talented front woman of the band, Cassadee Pope...

How has Warped been going so far? Anything crazy happen yet?
Warped has been incredible. I've met some truly genuine people. I think the craziest thing to happen to me so far was when we played our hometown show in West Palm. The crowd was huge and so energetic. I've never seen so many crowd surfers. I'll never forget that day.
So what can listeners expect from your new album "Beneath It All" (release date of August 17th)?
Listeners can expect a true, from the heart record. Everything is pretty organic. It has a 90s feel to it, and the lyrics are much more raw this time around. I think people will be taken back by some of the things I say. I'm really excited to see the feedback.
How did the writing/recording process differ from that of your previous release "Hold On Tight"?
I had been writing for this record since we started touring two years ago. So I went into the studio with a ton of songs and just rough ideas. That made the process a lot quicker than the last time since I was more prepared. I also co-wrote with a few people, including Butch Walker, Sam Hollander and Dave Katz, Matt Scanell, and Rob and Eric from the Hooters. The rest of the band came in and recorded their parts later on. I got to travel to LA to write so that was really fun.
Any specific artists ya'll were heavily listening to during the writing process that may have influenced the record?
I was listening to a lot of Michelle Branch and old Avril. I think people will hear the influences.
You guys are know to have a great live show, who are some bands/artists whose stage presence you admire?
I've recently been a huge Pink fan. Her live show is so tasteful. She doesn't overdo anything and she has such a demanding stage presence. I've also always loved William Beckett's stage presence, too.
How important is social networking for artists?
I think if artists lose that social networking strategy, it's over. People just want to know you care about your fans. And if you forget about them, chances are they'll forget about you. We're extremely lucky to have created such a wide basis on the Internet. Fans can interact with us on so many different levels now.
With all the success Hey Monday has achieved, how do you guys stay grounded?
We all know how lucky we are. And we know each other well enough to not let one another get a big head. We're very happy people, and we're not bitter about anything. I think that helps.
Any specific advice/lessons you would be willing to share with aspiring artists?
I always say this, but not giving up is the most important thing. Living with "what ifs" for the rest of your life sounds so lame. Don't be afraid of rejection. It only makes success feel sweeter!
How fun was it being on MTV's "Silent Library"?
Silent Library was pretty hilarious. I don't know how the crew kept straight faces the whole time. Because obviously, I couldn't!
Let me paint a picture... You are driving in your car, its a perfect day and you have the windows down, what are you playing ?
I'd be playing "Surprise, Surprise" by The Starting Line or anything off of "Take Off Your Pants and Jacket" by Blink182.
What is next for you guys after Warped Tour?
After warped, our record releases, we'll do a few acoustic sets in some malls, then a really awesome tour in the fall!
Posted by Mousertime Music And Stuff at 8:17 PM