The Morning Of interview with Jessica and Justin 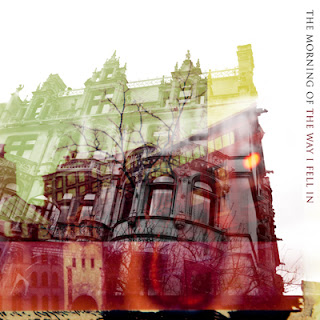 The Morning Of is a solid group hailing from New York that consists of Chris Petrosino(piano/guitar/vocals),Rob McCurdy (guitar/vocals), Justin Wiley (vocals/guitar), Jessica Leplon (vocals), Dan Celikoyar (drums/percussion), Ryan Jernigan (bass). The first time that I heard them I was truely impressed by their perfectly place harmonies and catchy hooks. TMO's first full lenght "The World As We Know It" was a tremendous success for the group, landing them high on the iTunes pop charts. Their second LP, "The Way I Fell In", show that the group has continued to grown both in their ability as sonwriters and talented musicians. The LP includes a well rounded selection of sounds ranging from the ballad-esque "Jennasea", to the catchy and upbeat "Waiting", slowing back down for "Heaven and Hell" which features guest vocals by Aaron Marsh(formerly of Copeland). I had the chance to speak breifly with the band's two lead vocalists, Justin Wiley and Jessica Leplon, about their newest release and opinions on some hot topics...
Mousertime: Hey guys, how has the tour been going so far?

Justin:Yeah it has been pretty good so far.Baltimore sol out, Philly sold out and Raliegh sold out, so three out of five is pretty good.
Mousertime: Your LP "The Way I Fell In" came out in May. What were some things that you did for this album, that were different from the writing and recording process of the firt full lenght?
Justin: When Jessica and I first joined the band, Chris, Abir and Rob had the "The World As We Know It" almost completely written without us. So, Jessica and I weren't really apart of the writing of that CD. We wrote a couple of songs with them that were on that CD, but the majority of it was them. For this new record, we had a lot more influence. Her, myself and Dan(our new drummer) were a lot bigger part of it. I guess that is why it sounds a lot different from our first CD.
Mousertime: How was it working with Jim Wirt?
Jessica: Jim Wirt is a musical genius, he really is. He is not from this planet, I don't think. He was always very motivational, and working with him was like a dream come true because of the people he has worked with like No Doubt, Incubus and Jack's Mannequin. It was really awesome working with him and especially going out to California for a month, seeing him everyday from morning to morning(laughs).
Mousertime: Were there any specific tracks on the album that you were specifically impressed with?
Justin: Yeah, Absolutely. I am very happy with how the whole record turned out, but there were certain songs that I liked better than others. I think is such a good producer, that you would have a specific vision for a song and then you go in and it ends up being something entirely different than what you pictured it, because the producer has his own vision. It comes out so much better than you could have imagined. I'd say a big song that was like that was "Jenesee", the first song on the CD. When I first thought of it I thought of something entirely different then what actually came out. That was one of Jim's "Babies". He loved that song so he made sure that it was the best it could be. I was also really happy of how the last song came out, "Heaven or Hell" with Aaron Marsh(Copeland lead vocalist). Before we went into the studio, the Aaron Marsh part wasn't even in there. It is like a completely different song with that part in there. So I would say those two songs, changed a lot and I was happy with how those two came out.
Mousertime: Being a band with that has two lead vocalists, how do you guys determine who sings what? Is it a trial and error process?
Justin: It is pretty much trial and error. Usually when one of us will write something, we will have a vision of one of us singing it. Even if it is Rob or Chris writes it, they will say"I envisioned Jess singing this, or I envision this part as you." Then will will try it and if it doesn't sound good, I will sing it. Or if I sing it and it doesn't sound good, Jess will sing it.
Mousertime: How would you say that you guys stay grounded?
Justin: It is easy to stay grounded in the music scene today, because none of us make money. We do it for the passion of playing the music that we created. It would be harder to to get "big-headed", because we have only achieved minimal success. Which is something that I am happy for, because most people don't even get that far. That is a question that you should ask someone in Coldplay, because The Morning Of is just a small band.
Jessica: We are an ant of a band, and they are a cockroach. Lizard.
Mousertime: How important is social media to a band like you guys?
Jessica: It is really important, especially if you are not on tour and you are not always seeing your fans, and you want to keep them in the loop of what is going on. "What are you guys doing? Are you still writing music for us? What are you doing?" So do need to keep them updated constantly because they do want to know what is going on with you, which is great!

Justin: As far a social networking goes, I think that it is extremely important, especially now-a-days with how big the Internet is. I also think that is a huge part of why music isn't as good as it used to be ten years ago. This is kind of arrogant to say, but kind of the allure of music was that these were the people that you wanted to be and you would strive to get there. Those were the people that you looked up to and you couldn't be in constant contact with them. That was one of the major appeals, you only got to see them once every few months. Now with Facebook and Twitter has made it to the point that kids know everything about you. From your favorite color, to the girl you date, to the way that you dress. That take away a lot of it. Those kids feel like they know everything about you, which takes away some of the appeal of it. They don't have as much of a drive to come out and see you at a show. They can go watch an entire set on YouTube and that was filmed on somebody's digital camera, so they might not go see them live. Internet websites, where you can go download our entire record for free. If you are fifteen, and your parents are hassling you, you are not going to ask them for money to go out and buy a CD if you can get it for free. I think these websites are important, especially these days. However, I do think that it is a major downfall of music, and a major part of why bands are breaking up. They don't even make enough money to support themselves because of Internet websites like that.
Mousertime: Perfect day, windows down in the car, what are listening to?
Justin: I feel like it is different for me everyday, depending on what mood I am in. A big album for me, when it is nice like that is "Gold" by Ryan Adams. That is a really nice weather album. Passion Pit "Manners" is a really fun record to put on, and you can always bust out the classics. Like the first Jack's Mannequin album,"Everything In Transit", is a really good record like that.
Jessica: I listen to a band Marina and the Diamonds, "the Family Jewel". I also listened to Led Zepplin, "1969" and I was listening to Ellie Golding. She is an excellent singer/songwriter.
Posted by Mousertime Music And Stuff at 7:48 PM

Labels: The Morning Of