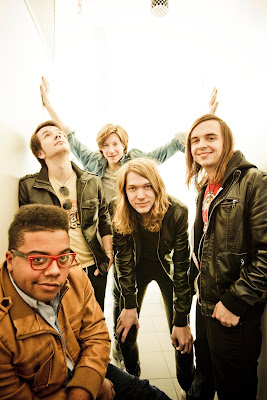 How is the "Rock Yourself to Sleep Tour" going so far? It's crazy. That is the best way to describe this tour. We have toured with Every Avenue and There For Tomorrow before and have always had a blast with them. This is our first tour with The Secret Handshake and it's always really awesome to tour with a band you've never met or played with before and become good friends with them. The shows so far have been incredible. I'm a huge fan of smaller venue shows because not only is the energy of a small crowded sweaty loud room irreplaceable but I also think that it gives the supporters that are coming to the shows a huge opportunity to meet and have a conversation with the bands they are coming out to see.
Can you tell me a little about the inspiration behind your new album "Everything Collide"?For the last year and a half since the release of our debut, "Come Around," we've gotten to go through so many different experiences as friends and as individuals as well. Break ups, meeting new people, deaths, parties, new friends, lost friends and all different kinds of things good and bad. The whole theory behind the album is that life is insane, it's a blast, it can be sad, it's like a thunderstorm, it's just crazy. Sometimes the only way to make it through is to let everything collide and find out what is truly meaningful to you and see what is really worth fighting for.
What do you guys think you did different on this album than past releases like "Come Around"? I think the biggest noticeable difference between the albums lies in the lyrics. While being on the road and going through all these different things that everyone goes through in life, we have to figure them out as a group but yet still alone and away from home. When we recorded "Come Around" we didn't really have much to write about. We wrote songs to write songs because we love it. On this album there was so much we had to say about our lives and about our feelings that we couldn't even fit all of it into an album. We sorted through 25 songs to pick these 11 that made the record. This album is us inside and out and you will be able to understand what I mean when you hear it.
What is the song you are most impressed with on "Everything Collide"? "Letting Go." It's track 9 on the album. This song was the hardest for me to sing vocally. It's the lowest and the highest I've ever sang in my life. Jordan Schmidt who produced and engineered the album really pushed me vocally on this album and for me, this song is a personal win.
How do you guys normally approach the writing process? Kieren wrote a lot of the songs on this album. However everyone throws in their ideas. There are some songs on the album that wouldn't exist if it weren't for Ben and Chris (Addicted To When You're Gone and Wonder Why.) How it works is one person will come with a basic idea. A riff, a verse, a chorus, a chord progression, anything really. After this idea is thrown on the table everyone puts their hands in and creates the rest.
How important is it for artists to listen to a variety of music? It's one of the most important things an artist should do in my opinion. When you're in a band, you have a big group of supporters who listen to and buy your music, come to your shows and watch your videos on YouTube. With every record you release you need to grow as a band. If you don't do that then your group of supporters will grow up without you. Nobody wants to hear the same album released 5 times. If you don't listen to a variety of music, how will you ever grow as a band musically?
What's next, after the tour? You can expect us to be in a city near you in the fall AND we're about to drop our music video for our next single, "Here With You." So definitely keep your eyes peeled for that!
How pumped are you now that the original lineup for Taking Back Sunday is back together? DON'T EVEN GET ME STARTED!!!! TBS has been one of my favorite bands since before "Tell All Your Friends" was even released. I would kill to see one of their reunion shows but I can't because we're on tour. BUT I have been watching videos of the shows nightly on YouTube. I can confidently say that it's the most exciting thing that has happened for me in the music world in the last year.
Posted by Mousertime Music And Stuff at 9:24 PM