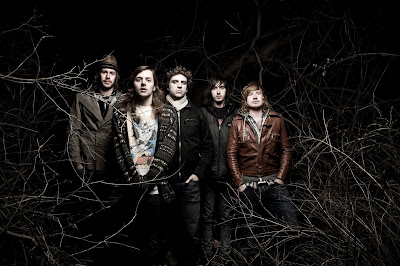 About six months ago I was catching up with my friend Dalton and he suggested that I check out one of his favorite groups, Closure in Moscow. At the time I had only heard the band named mentioned in AP magazine, but had not yet checked them out. I apparently was missing out a great deal. Closure in Moscow's debut full length on Equal Vision,"First Temple", ranks very high on my list of albums that are consistently solid from beginning to end. These Australian natives have been working hard over the past several years, by hitting the road hard and putting on unforgettable shows. CIM's strong sound is a perfect combination of post-hardcore and progressive alt-rock styles, which in turn has allowed them to gain success internationally. Front man Chris De Cinque's tremendous vocal range allows him to deliver a sound that is both haunting and powerful. Right now you can see Closure in Moscow on Warped Tour 2010 in a city near you, so go check them out! Now here is my interview with vocalist Chris De Cinque...
So how has Warped Tour been going so far? What has been the highlight?
Its been a pretty crazy adventure so far... the highlight for me personally has been the ridiculous catering. As a vegan its usually pretty hard to eat well on the road but this tour has me covered prettaaay prettaaaay prettaaaaay pretty good.
You guys seem to have such an explosive show, who were some bands that you looked up to as far as live shows go?
Freddie Mercury and Queen, David Bowie, Bjork...anyone who utilizes theatrical elements in their performance. Secrets in Scale are also a big live inspiration. Opening a set with monkey impersonations is always a winner in my book.
Are there plans for a follow-up to "First Temple" currently in the works? If so can you give a brief summary of how it will be different?
Some ideas are coming together. I'm not really sure how to describe how it will be different but I think it will reflect the personal growth we've experienced.
How does Closure in Moscow normally write a song?
We don't write any songs ourselves so to speak. They are beamed to our conscious minds from the higher dimensional realms of our subconscious. Like a text message from god: "hey guyz, thought u might lyk this song idea. Luv God lol x". When I try to wrote lyrics it doesn't work... But the ones that come out like a bolt from the blue, autonomously, that's the good stuff.
Who are some of your biggest influences?
Vince Noir and Howard Moon, Rich Fulcher, Al Swearengen, Cthulhu, Terence Mckenna, Jiddu Krishnamurti, Jacque Fresco and the double kicks from Metallica's "One".
How important is it for artists to listen to a variety of music?
Extremely. There is no such thing as true originality, everyone that creates something is borrowing from what they've been exposed to in their environment. I feel that the meaning of being creative is drawing from your influences and putting together elements in a new context. Therefore, if you listen to a wide array of music you have more to draw from and can hopefully put together elements in a really interesting way.
What kind of advice do you have for artists who want to expand internationally like you have?
Don't focus on things like expanding internationally, focus on making good music and the rest will follow, whether that be going overseas or not. Besides writing and performing, everything else is bells and whistles.
Posted by Mousertime Music And Stuff at 8:58 PM