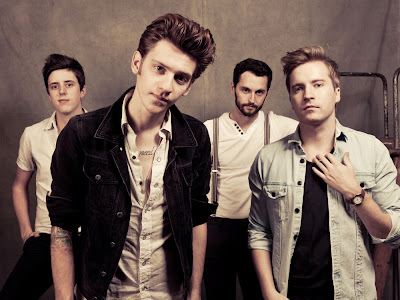 A Rocket To the moon has been hitting the road non-stop since 2008, picking up fans everywhere they go. I first heard the group when they were opening up for the Cab a couple years ago, and they blew me away of course. At the time they were promoting their Fueled By Ramen debut EP, "Greetings From..." which is a fantastic record. Since then, the guys have released their very successful debut LP, and most recently put out "The Rainy Days" The Ep features folk/bluegrass versions of songs off of their debut LP, "On Your Side," and a fantastic cover of Beyonce's "Single Ladies." Check out the band at a venue near you as they make their way across the nation on their first headlining tour! Check out my recent conversation with Nick and Andrew recently....

How are you guys feeling about your first headlining tour?
Nick: We are so excited to head out on this tour. We've been a band for few years now, and have been on some of the biggest tours over the last few years. But being able to go out and headline a full US tour for over a month is going to feel pretty rewarding!
You guys put out "The Rainy Day Sessions" recently, what would you say inspired the bluegrass feel for this Ep?
Andrew: Our mutual love for folk and country was a big inspiration. Most of us grew up on country, and we all like a lot of "folkier" artists like Ray Lamontagne, Bon Iver, Seu Jorge, Good Old War, etc. We wanted to try our hand at redoing our songs with that feel because we all firmly believe a great song can still be a great song when translated into a new style (hence why we tried the Beyonce cover).
Nick: We are all country/folk/bluegrass fans. I will honestly say that Country is my favorite genre of music. It is so easy to get wrapped up in the story telling. The instrumentation of a country song is amazing. Between slide guitar, violin, mandolin or whatever it may be, they pull it off in such a tasteful way. When we went into the studio to do The Rainy Day Sessions, we knew exactly what we wanted and we ended up leaving with an EP that exceeded our expectations.
Any specific artists that you were playing during the recording process that may have had an influence on the sound?
Nick: A lot of Ryan Adams, Johnny Cash, Brad Paisley and Hank Williams.
What attracted you to Dan Hannon to help out with this record?
Nick: We did a Christmas song with Dan Hannon on a day off during a tour and we had this instant connection. He is truly great at what he does and made us all feel very comfortable.
Andrew: We are all HUGE Manhester Orchestra fans. That was all it took.
How was the recording process for these songs? Chill?
Andrew: Very much so. It was "vibe oriented." Dan Hannon is masterful when it comes to building a warm, creative, comfortable environment for recording and creating. Everyone was very relaxed, inspired, and well, "in the zone."
What song surprised you the most in how it turned out?
Nick: I'd say Mr. Right. To be completely honest, Mr. Right isn’t my favorite song from our full length, "On Your Side". I'm personally a bigger fan of the acoustic based rock songs we have on there like, "Baby Blue Eyes" and "On Your Side". So, when we brought Mr. Right to The Rainy Day Sessions, we all knew we wanted to do something different with it to make it stand out. We put a folky swing on it and dropped the tempo quite a bit. I think between that and the female vocals, it definitely made me look at the song in a different light.
As artists, how important do you think it is to absorbs varieties of different types of music?
Andrew: Extremely important. If you wanted to direct films, and only watched horror movies, but then wanted to direct a comedy, you'd have no idea what to do, what to strive for, or how to know what you're doing is total rubbish. Being well-rounded and open minded is one of the best traits one can have as a musician.
Are there any specific country songs/artists that you are really into right now?
Andrew: Zac Brown and Band Perry have dominated a lot of listening time in the van. For me personally, Alabama takes the cake as my favorite country band ever. I can listen to "In a Hurry" every day and not get sick of it. My other favorite country song is "Forever and Ever, Amen." Timeless!
How did you arrive on "Single Ladies," as a cover for the album? (Beautiful by the way)
Andrew:Thank you! We all thought it was arguably the best pop song we had heard in years, and we wanted to prove our theory that a well-written song can translate into almost any format and maintain its power and like-ability.
How does it feel to be a part of television history? Being a part of some great moments on “Jersey Shore," along with other shows?
Nick: (Laughs) I'm personally a big fan of Jersey Shore so it was pretty cool to hear our song during Vinny's breakup scene. Any time you hear your song on TV it's a whole new experience as a musician. It's a crazy feeling for sure.
How did you guys get hooked up with helping the non-profit company Kaboom! and how was the experience?
Andrew: Through our label. It was an awesome time. I didn't see the episode of "Parks & Rec" that featured Kaboom until last week. I definitely had a good laugh though, and I'm glad Entertainment Weekly pointed out in their cover story on the show that Kaboom is a real charity, because I don't think that was very clear on the show. I'd love to do some more work with them again!
What kind of advice do you have for aspiring musicians/bands?
Nick: Just keep at it. That's the best advice anyone could give you. If you give up and think you're no good then you're not gonna get anywhere. If you have confidence and keep doing what you love, then you will go far.
What is next for you guys after the tour? Any writing or recording in the future?
Andrew: Both in fact! Writing, recording, then more touring!
Posted by Mousertime Music And Stuff at 8:44 PM