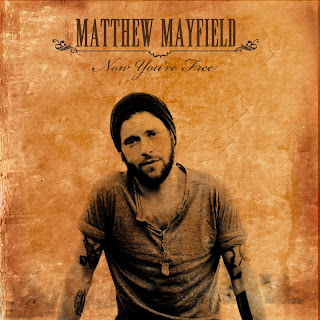 After almost a year and a half of putting out six separate Ep's, Matthew Mayfield will be releasing his first full-length album, Now You're Free on April 5th. With this album being the culmination of his previous works, Mayfield has carefully chosen some of his best songs over the past couple of years and paired them beautifully with newly written pieces. Now You're Free aims to provide new listeners with a perfect introduction to Mayfield's works, while still providing his die hard fans with several brand new songs and fresh recordings of some of their favorites.

Mayfield has the uncanny ability of crafting songs that start off small, then quickly build into huge anthems. For example, the album's opening track "Come Back Home" begins with a strong beat, southern-tinged guitars and Mayfield's signature raw, yet soulful vocals in a low key. As the song progresses, you can feel the song building as gang vocals are added along with Mayfield's roaring vocals, leaving the listener with no choice but to sing along. Several fan favorites have been re-masked with an even bigger sound, such as "Man-made Machines," "Fire Escape (featuring John Paul White of the Civil Wars)" and "Can't Change My Mind." Along with these is the very popular "Element," which was originally released on the 2007 Moses Mayfield record, The Inside. A stripped down version of the song was then featured on Mayfield's solo debut, The Fire EP, but still had not gained the recognition it deserves.

Pre-Order the album, Now You're Free, here:
http://matthewmayfield.com/
Also, catch him on tour:

Posted by Mousertime Music And Stuff at 9:13 PM