The Paper Raincoat Interview with Amber Rubarth and Alex Wong 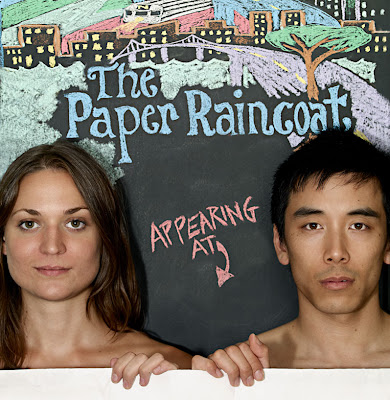 A couple of weeks ago I was watching(and listening), to On Tree Hill and a song caught my attention. After a little bit of digging, which is one of my favorite parts of hearing songs that I like on television, I found out the name of the song I liked. "Rough Cut," is a really catchy tune crafted by a duo from Brooklyn by the name of The Paper Raincoat. As I began to read about the duo, and listen to the remainder of their self-titled Ep, I realized that there was in fact something very unique behind the project... Join me as I interview Amber and Alex...
With you both being such successful musicians, how did the idea for The Paper Raincoat first emerge?
ALEX: (Laughs) Well actually I think we first had the idea of forming a band during a period of unemployment. We had started writing more the summer after my previous band, The Animators, broke up, and Amber was home from touring... and eventually we realized that the songs were taking on a sound of their own... so we decided to give it a name.

Did you originally set a goal/mission for the project and how you wanted it to sound?
ALEX: We did... there were certain words/adjectives we wrote on a chalkboard in the studio that we would constantly check, to make sure everything we were putting down adhered to those concepts. Some of the words were compelling, cinematic, and optimistic
In your debut Ep “Safe and Sound," you seem to create a fantasy world with fictional characters, accompanied by vivid imaginative stories. How did this idea first develop?
ALEX: we had started doing some creative exercises during our writing sessions as experiments. One of them was a comedy improv exercise our friend Vienna Teng showed us. One person closes their eyes and the other person asks them to describe whatever they see in their mind's eye. It's supposed to take the pressure of having to "create" away, so you're just "describing" something that exists somewhere. The more we did it the more we were describing the same world and the same characters, so we decided to spy on them more and more...
Will the stories continue to develop through future releases?
ALEX: We're not beholden to the story forever, but as long as it is interesting to us and we're curious about it, I think we'll continue to explore it.
Were there any failed story lines, that did not make the cut?
ALEX: hmm, never thought about that. There were some plot ideas that ended up not being used, but we both feel like we're mostly just following these characters and they tell us what they want to do rather than us directing them. In his book On Writing (one of our favorites), Stephen King talks about setting up "situations" rather than plots, and letting characters behave naturally. If you've created interesting people and a compelling situation, the plot unfolds on its own.
How did you approach the writing process, both lyrically and musically, for this album?
ALEX: We wanted to make sure the songs were relatable to us and the listeners with or without the back story, so a lot of the songs come from our personal experiences and then applied to the story. Musically we really tried to let every song tell us what it wanted - no preconceived notions of instruments/sounds. We wanted each song to work just right for itself, and felt that would make a better collection of material in the end.
Has your writing process changed since the debut Ep?
ALEX: I guess we were more deliberate with the Full Length. There was a self imposed deadline of a release date and limited time when we weren't touring, so we really had to be efficient during the time we had together. It worked out for that record but this time around I think it would be nice to have some more breathing room during the writing process.
How does your writing for this project differ from other project you are involved in?
AMBER: This is the first project I've been involved with where it really feels like a complete collaborative effort. Also the first one that has its focus in made up characters and fantasy worlds rather than observations and personal experiences. In a lot of ways, it's very freeing. The synergy with three people collaborating is very great too, and with Alex and I writing together I feel like it takes both of our songs to a new place that's very different than with our solo projects.
How has TV/film placement impacted the success of the project?
AMBER: We've been so lucky with this from the time we released our first EP. It has really allowed us to reach a broader audience before hitting the road like it usually takes. Alex and I both have other things going on and didn't want to throw ourselves for years onto the road with this, and it's given us the opportunity to still get our music out and have time to work on other musical things at the same time.
How important is social networking for the Paper Raincoat?
AMBER: I think it's been somewhat important, but we could probably be better at it.... we have some friends who are masters at giving a lot of new material on YouTube or Facebook, I think we are pretty low key with all of it. I think we'll get better though. You should be our friend.
Any full-length plans in the near future? Any new Ep's in the works?
AMBER: We're working on writing some new songs! Most likely it's going to be after the summer that they're released as we both have other albums being recorded right now. I'm doing a solo album with Jacquire King (Kings of Leon, Tom Waits, Cold War Kids) next month and Alex is doing his own solo record plus some touring with Vienna Teng and lots of production projects. But it will come!
Any touring lined up yet?
AMBER: Besides a couple scattered dates (Feb. 25 @ Highline Ballroom in New York City and April 22 @ The Ark in Ann Arbor, MI) we're mostly off the road until we have a new EP.
Perfect day, driving in your car with the windows down, what are you listening to?
ALEX: the ocean.
Posted by Mousertime Music And Stuff at 1:36 AM