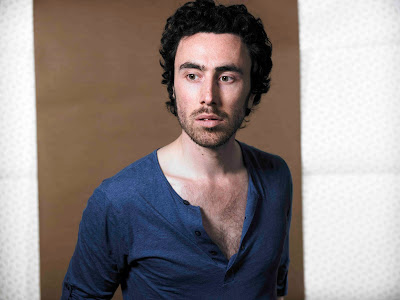 Glass Pear is the solo-project of Welsh native Yestyn Griffiths, and is currently getting a great deal of support from TV shows such a as One Tree Hill, Grey's Anatomy, 90210, Bones and Vampire Diaries. The singer-songwriter attributes a great deal of his success (30,000 downloads), to these American shows and owning all of his songs and his own record label (WOL Records).
Griffiths' strong vocals, swooning melodies and beats from varying genres found on his last two releases, Streets of Love & Sweet America, have held my attention non-stop for weeks. Please join me as I talk to Yestyn about his newest release, success in television  and his obsession with Juicing!

What have you been up to lately?
I’m really getting into juicing vegetables at the moment. Is that a boring thing to talk about? Try carrot, ginger, celery, apple. Yeah! I’ve just moved flats so I’m walking round in a daze moving objects around until it feels right. I’ve started work on recording a new album. Its more fruity than “vegetably”. Its feeling like a ripe mango at the moment, summery. Beach Boyesque. Exotic rhythms.
Coming from a family with many successful musicians, was there a great deal of musical collaboration early on?
Well, we all used to sing along to my dad strumming the guitar to Rocky Racoon, Turn turn turn and It ain’t me babe. And there was a lot of music in our home. But the family collaborations were more theatrical than musical. We’d stage productions of Hitchcock type murder mysteries for our relatives and friends. Murder in the shower with tomato ketch-up as the blood – that kind of thing.
How have you seen success through your songs being played on American Television?
Its been equivalent to getting mainstream radio play. I’ve sold over 30,000 downloads because of the TV synchs in Grey’s Anatomy, 90210, Bones, Vampire Diaries and One Tree Hill. Presumably double that figure if you take into account piracy. Because I still own everything – record label and publishing – it means I can survive as an independent artist and make the music I love and juice vegetables all day.
How important has social networking/media been to the success of Glass Pear?
Mmmh, the features in the TV shows happened independently of social media. Social media tools have been useful to stay connected to fans but I wouldn’t say they’ve been critical. What’s far more important is the quality of the music itself. No one juices rotten tomatoes. Then every artist needs some form of exposure: either radio, tv, touring and/or press. So social media and bloggers like yourself really do help spread the word around but it won’t create a career for an artist just by itself.
How would you say you approached the writing and recording differently for your latest EP, Sweet America?
It was intentionally a mostly acoustic record, with the primary instrumentation being acoustic guitars, vocal and piano. There are exceptions such as “Eyes wide open” which is more in the style of the debut album. I wanted to explore the basic elements of songwriting so that it all comes down to the song itself, and not the elaborate decoration of it in production. I have a belief that a song is really good if it still sounds beautiful when its stripped back to just voice and one primary instrument. Once you have a song like that, of course you can produce it in many different styles. That was my goal with this EP, to have a set of songs like that.
In Sweet America, you seem to combine sounds from several different genres. Was that intentional, or just a product of having many different musical influences?
No, it wasn’t intentional. I love the spontaneity of writing and making music. For me that’s the gem. I do hope to always be a progressive artist, always exploring new territories. I think its in my character. Believe it or not I’ve even tried drinking juiced cabbage!
How important is it for artists to widen their span of music they listen to?
You gotta do what you love, listen to what you love. I don’t think you have to listen to every type of music as a strategy. The only reason I do is because I LOVE music in most of the forms it has found an expression. It definitely gives me a greater diversity of vegetables to juice when I pick up the guitar, so its positive in that sense. Going back into musical history is also rewarding to understand how we got to where we are in music.
Are you working/ writing with any artists at the moment? Any new songs with Jem?
Yes Jem is about to put out a new record and I have co-written some lovely songs on that. I've also been co-writing with the artist VV Brown.
Is co-writing something that you would like to continue doing? Do you see Glass Pear going down the co-writing path?
Yes, I’ll definitely write songs with other artists in the future. I really enjoy it. Someone brings the spinach, I bring the pineapple, another brings the banana. Mix it all together…..wowza! It’s a green smoothie, it’s a beautiful song!
Who are some artists that you have looked up to in the past, in terms of live performance/stage presence?
Jim Morrison, Jeff Buckley, Prodigy, The Smiths, Blur, Depeche Mode, Radiohead, Lykke Li.
Perfect day, windows down, driving in you car what are you listening to?
-Jonathan Johansson Aldrig Ensam.
-Stone Roses Stone Roses
-Trentmoller The Last Resort
-Killers Human
What do you have coming up soon?
Writing, recording new album. Due out this summer! Video shoots, weird photos, juicing, London gigs. Walks in parks. Cat or dog or both?
Posted by Mousertime Music And Stuff at 2:24 AM