Good Problems Interview with Pat Brown(formerly of Sing It Loud) 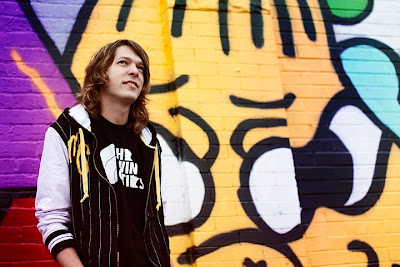 Former front man Sing It Loud, now has a new project that he has been working on with long time friend Mod Sun, called Good Problems. I recently chatted with Pat about how the project came together, amongst other things...

How did the Idea/vision for Good Problems come together? Were you developing it when you were in Sing It Loud?
I was developing it when I was in Sing It Loud. I had a feeling that the band would break up 6 months before we actually did so I was already planning ahead. I wanted to start something that people could believe in. Not just believe in like they believe i'll succeed and believe i'll get big but believe in what I'm saying. Believe that it can help them and make them a better person. That's what it does for me and I want to spread that feeling to other people.
What can fans of your previous works look forward to in this project? What would you say are some similarities/differences in comparison to your previous works?
Honestly it's very different from what I was previously doing. It's still my same vocal style but the lyrics and feel of the songs are very different. I don't sing love songs like I did in SIL. I write about my life and how I deal with situations. It's not full band stuff either it's all beats and orchestration that I make on Reason. One really fun thing about it is I collaborate with a lot of my friends who are Hip Hop artists. I'm trying to bring a unique urban vibe to the project. Good Problems isn't something you are going to be able to take or leave. People will either really enjoy what I'm doing and find it intriguing or it's not going to be their thing.
Who are some of your current influences? Anyone you just can't get enough of right now?
Right now I've been really into MIA, Santigold, Kid Sister, Gorillaz, and the new Kanye album.
How did you get hooked up with Mod Sun?(By the way, heard Jimmy Fallon talk about him on his show the other night!)
I've known Mod forever. The first band I was in he was the drummer. We grew up playing in bands together in Jr. High and High School together. In fact his first show as a rapper was in Fargo with Sing It Loud. Right when he started his new thing I put him on a bunch of shows and backed him up really hard. I've always believed in that kid and helped him anyway I can. Now he's doing the same for me. He co produces all of my music and all of my decisions with me. I also work with his people. We're building a really unique inner circle style team, it's dope. He's one of my best friends.
How has it been working with him?
Fantastic. He's one of the most talented and inspiring people I've ever met. If it wasn't for him I wouldn't have been able to make the decision to keep doing music after SIL. He encouraged me and scraped me off the ground during a hard time.
You currently have a free Ep out, I'm Changing My World, what was the inspiration behind that title?
I was writing the song and I had just written the bridge which goes "All the things I used to love I've kicked to the floor, i'm talking about the old clothes and talking about the girl, I'm changing my world" and I wrote it about how I ditched the mega tight skinny jeans, extra small shirts and cut my hair because I wanted to change my look and how I broke up with my girlfriend and when I read that line back to myself I just felt very good. I emailed Mod Sun and said "Dude I just figured out the name for the EP."
How did the songs come together? Did you co-write with anyone?
I co wrote the whole thing with Mod Sun. I wrote most of the lyrics but he helped a lot with the beats and percussion aspect of the EP. The songs came together very naturally and the lyrics easily because I had so much to say after what I had just experienced in my life.
I see that you tweeted recently that you were working in the studio, do you have a full length in the works? Ep?
Yeah I'm always in the studio! In fact Mod Sun, his DJ (Beanie) and our executive producer Mikey Bryent run a recording studio in downtown minneapolis called BloomingSounds together. We have unlimited access to recording so we're always bangin out jams in there. I'm going to be releasing a FREE full mixtape in 2 months online. I can't wait. I've gotten to spend a lot more time on the songs. "I'm Changing My World" was my introduction to the world and this next release will be my follow through.
Any shows in the future? Touring?
I'm doing some dates in April with my little brothers band, Skies Alive. Then after that Mod Sun and myself will be doing some tour dates together.
Where is the best place to keep up-to-date with what's going on with the project?
http://twitter.com/thepatbrown and http://facebook.com/mygoodproblems
Posted by Mousertime Music And Stuff at 8:25 PM