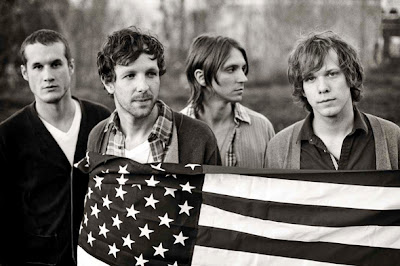 As the music industry changes, many bands are adapting and finding better ways to connect with their core fans and keep making music that they like. One of my favorite groups, Lovdrug, is currently going through this transition. Recently, Lovedrug has parterned with Pledge Music to create the "I AM LOVEDRUG" campain to raise funds for their upcoming LP. With every pledge made to the campaign, a portion of the proceeds will go to band's charity partner Mocha Club. Fans will have a chance to bid on rare items, gain access to exclusive content, and ultimately aid in the making of Lovedrug's newest record! Check it out at www.IamLovedrug.com. I had a chance to speak with frontman Michael Shepard on Lovedrug's latest news...
Shout out to Shaun Berger...
How did you guys come up with the idea of making your new record and interactive experience with your fans?

Shepard: It started with the release of an ep and sharing some of our newer demos with some fans. Their feedback was paramount in our moving forward with the writing process. So we decided to release a series of 2 more eps (3 total) to let the fans be involved in the choosing of what types of songs would make the record. Our label crapped on us so they got an angry record in return. It was maybe unfair to the fans.. but what can I say, sometimes demons need to be exorcised before growth can take place. Now it's all about a new beginning, involving the fans and making the record that we've been meaning to make all along.
How did you guys get hooked up with Mocha Club, for the making of your next full-length?
Shepard: We've been checking out their organization for a while now. It just made sense to get involved now and tie it in to the Iamlovedrug campaign for maximum exposure for them. It's a great cause.
What are some exclusive items that fans can purchase, to help raise funds for charity and the new album?
Shepard: There's something for everyone really. Everything from an entry level pledge where you'd receive a signed copy of the new album before anyone else, all the way up to personal writing and recording sessions with the band. It all depends on the pledge amount.
Now that you guys are label-free, what have been some of the benefits?
Shepard: I don't know. We'll see I suppose.
What was the inspiration behind the idea of creating a series of 3 EPs?
Shepard: It was a way to share our demos with the fans. In turn their feedback would help us decide what kind of songs to write for this record.
Have you began writing/recording for the new record?
Shepard: We've been writing it for the past two years. We have about 60 songs at this point. We're ready to record.
What would you say this record will bring to the table in comparison to previous releases?
Shepard: It' new, fresh. I couldn't compare it to anything we've done in the past. I feel the way I did when I was making our first record though.. so maybe that's an indication.
How did you guys come upon covering Def Leppard's "Hysteria"?
Shepard: I've always wanted to cover that song. I'm actually a huge Def Leppard fan. A lot of younger folks might find that cheesy, but I think it's awesome.
Overall, what's your favorite song to perform live?
Shepard: I don't know. Not Black Out.
Who are some artists/bands that you have looked up to in the past/present in terms of live performance?
Shepard: The Black Keys. Even though our music is nothing alike I respect Dan and Pat so much. They rule.
Perfect day, driving in your car, windows down what are you listening to?
Shepard: Most likely, if you'd ask my girlfriend, it'd be a film score. Or maybe Muddy Waters.
What do you guys have coming up next?
Shepard: The afterlife. Cheers to it.
Posted by Mousertime Music And Stuff at 4:42 PM