fun. Show Review by He Who Fights With Monsters 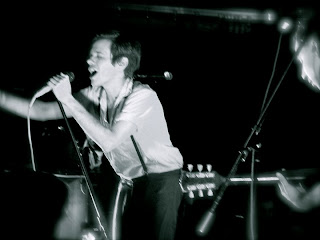 Fun. put on one of the most energetic shows I had ever been to. Since their band name is “fun.” they have an expectation to live up to, and they do, very well. Their opener was “Be Calm.” It was the song that made me fall in love with them. There is so much to their music, that sadly they lack the sufficient number of band members to accurately re-create their sound live exactly like it sounds on the album. On the other hand, it is great because it allows them to make for themselves a different, yet similar, sound like of that on the record. For what some may see as lacking during a live show, frontman Nate Ruess makes up for it in pure, unbridled energy. They played “Dog Problems,” an all-too familiar The Format song. He (Ruess) commanded them in an emotional outcry against a girl from the song. He had complete control over the crowd after that. Overall, they played a great show. There is no way no one left not amazed. They said they are releasing a follow-up record to their debut, “Aim & Ignite” soon, and also that they would be back to Atlanta early next year.


-He Who Fights With Monsters
Posted by Mousertime Music And Stuff at 2:42 PM

Labels: fun., fun. show review, He Who Fights With Monsters