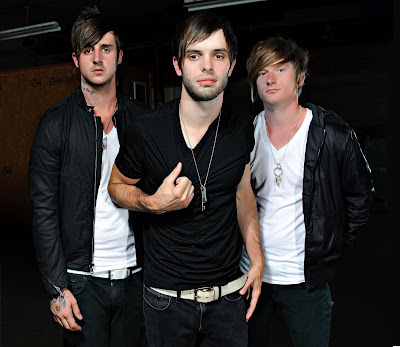 So your latest Ep, "Party The Night Away", came out this past Monday (September 13th). What do you think this album brought to the table, in comparison to your previous releases?
Luke: It's more polished. Still a slight mixture of styles like TGIF, but more consistency. I think it's more mainstream, which makes it a little more marketable.
How did the writing and recording process pan out for the Ep? How did it differ from the past?
Luke: We weren't as familiar with the software we used to make beats and samples during the first EP so it took us awhile. Once we figured everything out, things went a lot more smoothly. When Joe and I first wrote "Party the Night Away" it sounded a lot like TGIF, but our producer Geoff Rockwell wanted to make some changes. We were hesitant at first but definitely dig the finished product!
How was it working with producer Geoff Rockwell (Forever the Sickest Kids, Disco Curtis)?
Luke: To be honest, it was really rough in the beginning. I've done solo projects since I started and I'm so used to writing a song EXACTLY how I want to. So when someone else gives creative input it's really easy to be stubborn and not want to listen. I think it's something that every artist kind of struggles with. Joe is the same way. In his previous projects he wrote everything too. Even in the beginning of FNF we both clashed with each other until we figured out a system which turned into Friday Night Fever. Joe and I, overtime, learned to read each other and now we hardly ever clash. ....BUT getting creative input from someone we've never met sucked at first and we just had to trust him, even though deep down we wanted to be stubborn lol. At least there was credibility since he co-wrote and produced FTSK's stuff. I'm really glad we listened to his ideas.
"She Felt Like Destroying Something Beautiful" was featured on your first Ep "TGIF".How did you guys decide to slow it down and put on the new Ep? (Amazing by the way)
Luke: I love this question. I wrote "She Felt Like" in college before I joined FNF. I was in a serious relationship that ended a couple months before the song. It's a very very true story about a college party, and was written as a slow song at first. On TGIF, it's full band to show my anger/cockiness towards the situation. But I wanted listeners to also feel the desperation behind the song. It was a tragic event in my life and deserves a lot of attention. For the acoustic version, Joe and I orchestrated the song with an epic/tear-jerking vibe, 1. to show that I wasn't just pissed off and cocky and that the song really was sincere, and 2. to show that we can write more than just dance/rock.

Any specific influence behind the album? Anyone you were specifically listening to a great deal?
Luke: Party the Night Away is actually influenced and built around "She Felt Like Destroying Something Beautiful" (which is by far our most played song) and is also a bonus track on the album intended to be an introduction to the acoustic "She Felt Like". Nobody has heard this acoustic bonus track yet unless they have bought the CD.
And actually, no, before FNF I barely listened to any music because I was too busy writing my own.
Is there a full length in the works?
Luke: Absolutely!!! We have 15 new songs and are dying to get in the studio! We are so excited for the new stuff, because we have learned so much the past two years from successful people like Geoff Rockwell and others we've come in contact with, on top of growing tremendously as musicians and realizing what's working and what the industry is looking for. There are so many aspects to writing a hit that are really easy to over look.
How did you guys get hooked up with kickstarter.com? Congratulations on making your goal!
Luke: I heard about the site and emailed them asking if we could start a project! Thanks!
You guys have been touring like crazy lately, do you mind sharing the craziest thing that has happened while on tour?
Luke: LOL...we have used our tour laminates to get in to so many big shows. People at the door think we are part of the band. :)
How important is social networking for artists like yourselves?
Luke: It's probably the most beneficial thing we could do as an unsigned band! We think it's more beneficial then going on small tours because if you don't network and build a fan base, you won't have kids at shows....and that's a big lesson that we learned, because we've played multiple shows with 5 to 10 people tops...not fun lol. Networking is only good if you treat it like a full-time job. So many bands would rather just show up to practice and play shows and be "rock stars". Networking is a huge/important job in a band or any business for that matter.
As band that tours a ton and does a lot of self-promoting, what are your thoughts on file sharing?
Luke: It sucks, but it's impossible to avoid...so it really doesn't bother us too much. There are still plenty of people that help us out and either purchase our physical record or buy it on iTunes.
Perfect day, driving in your car with the windows down, what are you listening to?
Luke: Katy Perry, Friday Night Fever, Jason Derulo, Hip-hop radio, FTSK...Katy Perry is the only thing on my iPod other than us though lol.
Landon: FNF, Starting Line, Relient K, A Day to Remember...while I'm drinking a smoothie!!
Joe: Friday Night Fever
What is next for you guys? Promoting the album? Touring?
BIG things soon! 3 CD release shows Sept 25, Oct 9, Oct 10. Regional tour in Oct, East Coast run in November and big plans for the new year!
Posted by Mousertime Music And Stuff at 7:16 PM