Dallas Taylor of Maylene and the Sons of Disaster Interview... 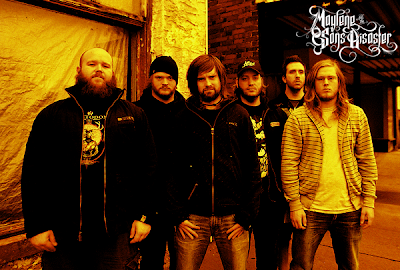 photo by Ryan Russell
I have heard stories about the origin of your name, but could you explain briefly how it came about?
We are just big on local history, and it comes from this lady named Ma Baker that was a mob boss in the 1930's. We also used to practice near a little town called Maylene.
You guys have such and original blend of country and hard rock, who are some of your main influences?
I would say for myself AC/DC, Lynard Skynard, The Marshall Tucker Band, Tom Petty, Tori Amos, George Jones, and Willie Nelson.
Dallas, who are some frontmen that you look up to as far as stage presence goes?
I am not sure... when I was a kid there used to be this band from south Florida called Failsafe, and they where one of the craziest bands live. Their singer was so crazy on stage. I really liked how he did not care what the crowd thought, and acted like they where not even there. A lot of inspiration came from just going to a lot of hardcore shows, and seeing how much feeling and passion the frontmen had. It was a different, and a better time back then. I think now it is mostly about trying to fit an image.
What were some of the influences behind your lastest album "III"?
I was big into Tom Petty, and the Marshall Tucker Band, and was just listening to a lot of Southern Rock when we where making III.
You guys seem to be touring constantly, any funny stories or pranks that you would be willing to share?
Too many to think of just one. We are really big on pranks. We love it so much we prank each other. We are a very light hearted band, and try to make the most of it while we are on the road.
Any plans for a new album soon? If so what are you aiming for that is different from the last three?
We should go into the studio in the late fall. We are really going to go for it with this next record. I think it is going to be a new step for us in a lot of ways. We are still in the beginning stages, but I think it is going to be a new direction for us in all ways, but will still feel and sound just like Maylene.
Posted by Mousertime Music And Stuff at 5:05 PM

Labels: Dallas Taylor, Maylene and the Sons of Disaster