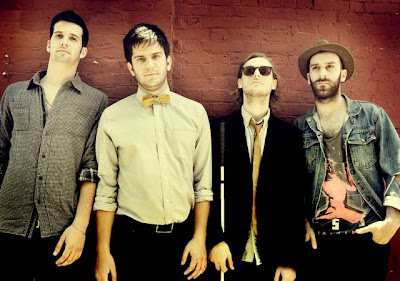 This band first grabbed my attention when the title track off of their latest record, Litost, was featured on an episode of One Tree Hill. The track is fantastic, but shows only one of the many sides of the band. On Litost, Ambassadors seamlessly fuse together a number of genres and sounds, creating beautifully soulful songs with catchy percussion.
I kid you not, this is my favorite record of 2012. I doubt that will change.


Front man, Sam Harris spent some time answering some questions for me and followed it up with an acoustic performance of the song that lead to me discovering them,"Litost." Please see the acoustic video posted below the interview.


http://ambassadorstheband.tumblr.com
As you guys gear up for touring, what can people expect when they come out to one of your shows?
They can expect all the songs off our new record, plus a few new ones we've been toying around with that will be on our next one.  We're constantly writing stuff and we wanted to test some of it out on the road: our goal as a band is to put out as much material as possible... as long as we think it's good.
Who are some bands/ artists that you guys have looked up to in terms of stage presence and live performance?
I've always been a fan of Prince.  The way that dude can move and play his instrument and sing his ass off all at once is like something from a different planet (which, to be honest, would come as no surprise to me if it literally was).  Other than him... I think we all just wish we had moves like Jagger.
How is the music scene in New York?
New Yorkers LOVE to dance.  But not in front of anybody else.  And especially not in front of a band.  Other than that, it's a hoot and a holler.
Litost just dropped recently, what would you like for listeners to take away from this album after listening to it?
Someone told me after we recorded this album that it sounded pretty "mainstream".  It was easy to get a little offended at first, but then I realized that it kind of made sense that this is what we came up with; almost all the music we grew up listening to in the late 90s and early 00s sounded as big and bombastic as we wanted our record to sound.  So in the end, I guess we wanted to make something kids our age could listen to and get a little nostalgic for their middle-school and high school years.  Even if it's a tough kind of nostalgia.  That's what we want people to walk away with.
Did you guys have a direction in mind for the record, before you began recording it?
Again, we knew we wanted to make something big; something that could transport us and the listeners somewhere else.  It was a pretty brutal winter in New York and we had all been going through some difficult personal stuff at the time, so our mentality was a bit of an escapist one.  But honestly I feel like most records are written like that anyways.
Were all of the songs written during the same period of time?
Yea, most were written right after my brother had his kidney transplant and right before myself, Noah and Adam were about to graduate from college.
Listening back to the record, can you hear any specific influences?
We were listening to a LOT of Kanye on our drives to and from the studio.  And a lot of Hot 97.1 FM (an awesome Hip-hop/R&B radio station here in New York).  You may not be able to hear it offhand, but if you listen closely... it's there.  Maybe a little Fred Astaire on the opening track, "Weight/Lightness", too. 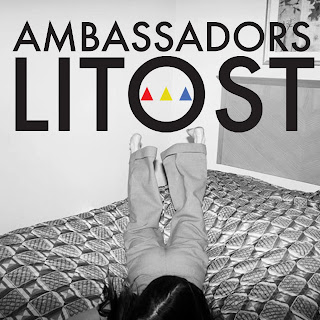 I am completely blown away by how diverse this record is, was that done intentionally? Or is that just how it panned out?
It was never intended to be so diverse, but that's just how most of our records seem to come together.  We have so many different musical influences and we like to pay homage to them all in our songs.
I am specifically curious about how your songs "Litost" and "Bodybag" came together...
“Bodybag” is probably the oldest song on the record.  A different version of it had been released on our first EP but it didn't sound right, so we decided to do it again.  This time around we made it way more gospel-y and more organic sounding.  "Litost" was a song I wrote towards the end of a really taxing relationship.  The song kind of speaks for itself.  That one was mostly arranged by me, alone in my bedroom with the help of our friend Max Drummey (from the band Chester French) who did all the string arrangements for it.
Who did you work on the record with, outside of the group and what attracted you to working with them?
We worked with our friend Dan Stringer, who we've known since college and have worked with a few times in the past.  Dan is the coolest dude and the best engineer we've encountered so far.  He really knows our sound and is great at taking direction from all four of us, which is a difficult task in and of itself.  Plus, we all have a very similar sense of humor and have spent many nights drinking each other to sleep.
Are you guys blown away by all of the positive reactions to the album thus far?
Yes.  We worked extremely hard on this album so it's also a big affirmation, but it's always a treat to hear how much people love the music you're making.
How important is social media/networking to you guys?
As important as it is to Kanye West.  Very important.
What kind of advice do you have for emerging independent artists? Any specific words of wisdom?
When in doubt, go with your gut.  And always surround yourself with people you trust; who are not only just as excited about what you're doing as you are, but who are also going to push you to do better.  Also, don't be afraid to make something your parents won't like.
I saw that one of your songs was featured in a recent episode of One Tree Hill. Did you get a chance to see the specific scene it was featured in?
We had a whole little screening session at Noah and Adam's apartment.  It came on within the first 6 minutes and lasted for 3 scenes: a therapy session, a guy putting his kids into their car-seats, and a scene with this girl and some dude talking in their kitchen.  Pretty unexciting stuff (laughs).
Perfect day, driving in your car with the windows down, what are you listening to?
Drake.  Or Ray Charles.
Any plans after the tour? Working on any new material yet?
World domination.  And putting out a new record every year.

Posted by Mousertime Music And Stuff at 11:08 PM