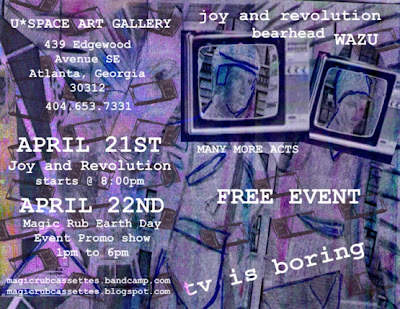 SECOND SINGLE, THE CONTAGIOUS “HAPPY ENDINGS” AVAILABLE FOR FREE DOWNLOAD NOW
http://download.themusebox.net/wazu/happy_endings.mp3
VIDEO FOR FIRST SINGLE “MURDER 1” EXCLUSIVE PREMIERE ON UK GIANT CONTACT MUSIC
ALSO FEATURED AS VIDEO OF THE DAY ON SPINNER
http://www.contactmusic.com/watch/wazu-murder-1
UPCOMING LIVE PERFORMANCES IN NEW YORK, CANADA & ATLANTA
RECENT APPEARANCES IN CANADA & LAS VEGAS
“Listening to WAZU’s "Murder 1" provokes the urge to paint an Aladdin Sane lightning bolt across your face and visit a seedy, underground hot spot full of androgynous artists and wandering neon lights. The track sparkles with all the glitter and glitz of 70s glam rock and pops in your head like candy.”
- THE DELI MAGAZINE
“Fans of Depeche Mode, Duran Duran, Talking Heads, and David Bowie will want to have a listen and grab "Murder 1" from Australian-born, now NYC-based duo Wazu. The track combines elements of glam, grunge, electronic, pop and goth to create a dark, danceable atmosphere.”
- SOME KIND OF AWESOME

If you’ve been paying attention to the NYC music scene (and you should be!), you know that Brooklyn-based Australian transplants WAZU have been generating heaps of buzz as of late. “Murder 1,” the synth-heavy, post apocalyptic first single from their three song WAZU EP (Anti-Language Recordings) is getting rave reviews. The accompanying video premiered exclusively on Contact Music and was recently featured as Video of the Day on SPINNER. Watch it here: http://www.spinner.com/2012/02/20/wazu-murder-1-video-of-the-day
The track is a glorious, vicious little tease of what’s to come from this male-female duo that appear to have swallowed some of the same sexy electronic pills as The xx, but have regurgitated them in a much more elaborate and foreboding fashion. “Happy Endings,” the second track off the EP produced by the legendary Kevin McMahon (Titus Andronicus, Real Estate, Swans, The Walkmen), is a cynical sing-along that resonates with the lyrics, “take a look at me / I’m living proof / Happy endings don’t have room for two.” Never has heartbreak sounded so enticing and danceable. It is now available for free download.

In their first week of playing together as WAZU, the duo performed seven shows in six nights at the Top 10 “Best of the Fest” Festival at Toronto Indie Week 2010. “We showed up planning to play three shows, but [we] kept winning!” Shortly after, the band performed as part of the CMJ Festival at Lower East Side staple The Living Room, the Neon Reverb Music Festival in Las Vegas, and the Dropout Party at Don Hill’s in NYC. In the past few months WAZU made the Top 3 of the Deli Magazine’s Year End Best of NYC poll for emerging artists in 2011 and the EP has earned the band glowing reviews and promising mentions in In-d Scene UK, Some Kind of Awesome, and Alfitude, to name a few.

Catch WAZU at one scheduled shows listed below, and be on the look out for WAZU’s debut LP, also produced by Kevin McMahon, Summer 2012.