A piece I did for Variance Magazine: 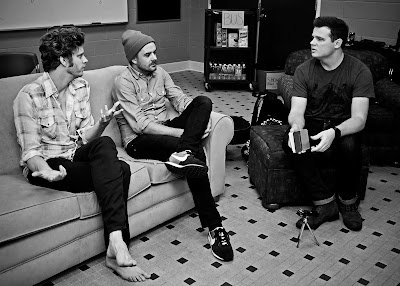 I recently sat down with Matt Thiessen and Matt Hoopes, founding members of Relient K, to discuss the album they are currently recording, as well as their other current projects. PLUS: Watch an exclusive video of Thiessen and Hoopes performing "Forget and Not Slow Down" below.

Variance Magazine: How is the writing panning out for you guys right now?
Thiessen: It's good. I think that we are just trying to be a little adventurous with this next record, and not necessarily in an experimental way, but just doing something different for us. We are just trying to figure out what we can do that people won't necessarily expect and how to do it without alienating everyone that might already like what we do now. So that is the crux of it. In our opinion, we aren't really worried. If we do what we feel right now and then if it doesn't work, then we will do another record. It's our seventh one, so we can't try and repeat the fourth, the fifth or the sixth and recycle our material. We are just trying to do something fresh.
Hoopes: I think that has been the most exciting thing because it does feel like starting over in some ways. In the same ways that it is kind of challenging, it also makes it exciting to play music on this basic level. I told Matt that working on some of these new songs is giving me this feeling that I haven't had since we were in high school together, writing new songs. It's fun, and it's fun to push the boundaries of what we are comfortable with--not just do whatever comes easiest.
VM: I'm excited to hear then new stuff. Something that I have always admired about you guys is that you make significant changes from record to record. So would you say that the new songs are more than the "normal" Relient K change?
Thiessen: Yeah, that's the thing. How do people even interpret songs these day? It used to be, "this band is in this genre," but now I think it is more like, "how good is the melody? How good are the lyrics and do I like it, or do I not?" These songs have catchy melodies and decent lyrics hopefully, so we are just going to mess around with the rest of it and see what happens.

Posted by Mousertime Music And Stuff at 6:19 PM