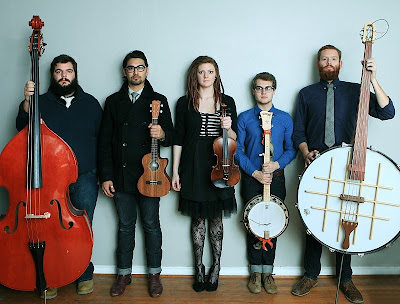 Recently a friend turned me onto a band by the name of Seryn, after hearing them play at the Catalyst Conferenc in Atlanta Georgia. In their debut full-length, This Is Where We Are, Seryn manages to draw from several different genres, including folk, country, rock and indie. Pulling together a plethora of organic sounds and instruments creating a beautiful, unique sound.
For the latest news on Seryn and for upcoming tour dates, check out their site http://www.serynsound.com.

Cliché one, where did the name Seryn come from? Is there a story behind how it was chosen?
At one point, someone wrote it on something.
How/when did this project begin?
The band started forming during the spring of 2009 while Nathan and Trenton were roommates. By that May we had the current five-person line-up together.
With five members, each able to play a variety of instrument I would assume that you would all have different musical tastes. How would you say you arrived on your sound?
Hopefully we haven’t arrived at a sound. We all listen to different music, but we all align on certain aspects of music itself.  The record came about in a time we were entrenched in folky music, so it came through in what were attracted to sonically.  Currently we are gravitating to new sounds, including vibraphone, piano, and sound manipulation, i.e. sampling, covering a glockenspiel in foil©, you name it. We just really like making noise.
What can people expect when they come to see you live?
All of our favorite noise! People have complained that we don’t really talk that much onstage, but when we are up there, the focus is on experiencing the music. That’s our presentation, and none of us are as funny as Ryan Adams or have stories like Jeff Tweedy.
Who are some bands/artists that you have looked up to in the past, in terms of stage presence?
In terms of stage presence? It’s impossible to emulate someone else’s moves. Just seeing people play music with conviction. It’s a different list for each of us, but we just play.
How did the writing process pan out for you on This Is Where We Are?
We had almost everything finished before heading into the studio, it’s the only way we can afford to do it. The studio is a well oiled machine, we just go in and rip through the songs as fast as we can.
How does a song normally come together for you? Is it completely collaborative?
Writing for us is a slow and arduous process. With lots of backtracking, rethinking, deleting, re-arranging, and all other sorts of time consuming things. Then we come up with something completely different that just works! We strive for a result that we all love, and can fathom playing for years. We still get the same feelings playing the songs as when we first wrote them.
Are you guys currently working on any new material? If so, about when can fans expect your next release?
We are churning out new songs like crazy right now.  Look for new material spring of next year, even earlier if you come out to a show.
What role does your faith play in your music?
We don’t make any distinctions along religious lines inside the band, or with our audience. We don’t have a religious message, nor do we intend too. We just like making noise. 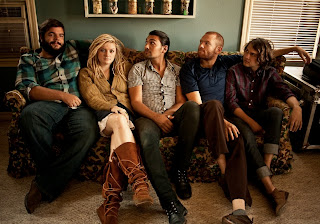 Who are some of your bigger musical influences right now?
Hmm... everything is on such an osmotic level at this point. I feel constantly pulled to hear some new sound on the radio or a blog, and discovering where all the standard sounds came from in old recordings of the past, or things I missed out on when I was younger.
It's fascinating to find out what other people grew up on too. My folks raised me on The Beatles, The Doobie Brothers, stuff like that. Then later Dad went through a year of only Mozart, and we listened to every piece of music he ever wrote, more than once.  I never listened to The Rolling Stones or Bob Dylan, so finding their music is like a new band to me.  I know Trenton spent more time with Journey and TOTO, and then started playing hardcore/screamo type stuff in high school.  I love when someone burns me a CD and says "you gotta check this out! "  That's how I found out about Nick Drake and Van Morrison.
Perfect day, driving in your car with the windows down, what are you listening to
Ambivalence Avenue by Bibio (Chris)
Superbass by Nicki Minaj or Party in the U.S.A. by whoever it is that did that song. (Nathan)
Bobby Darrin (Trenton)
Akron/Family S/T (Chelsea)
" I'm listening to Dethklok. The sounds of insane double bass, shredding guitars, and thick growling vocals really calms me down. " (Aaron)
Posted by Mousertime Music And Stuff at 9:09 PM