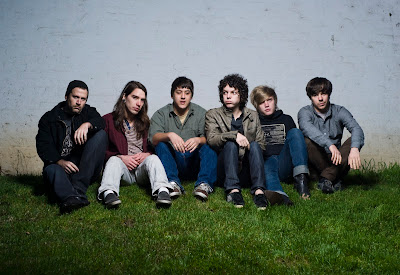 Sacramento, California based progressive/alternative band, A Lot like Birds, is back with a brand new LP and a solid line-up. What started as the brainchild of current guitarist (and former lead vocalist), Michael Franzino, is now a six piece powerhouse featuring dual vocalists Kurt Travis (formerly of Dance Gavin Dance, O! the Joy, Five Minute Ride etc.) and Cory Lockwood. In addition to the founding guitarist, and vocalists, Michael Littlefield (bass), Ben Wiacek(guitar), and Joe Arrington(drums) round out the energetic group. A Lot Like Birds aims to push the normal boundaries of the music scene they are part of, and provide listeners with a unique musical experience spanning several different genres. Thus far, the new album Conversation Piece has received fantastic reviews from both fans and critics. For more information on the band, check out the band’s facebook page http://www.facebook.com/#!/ALotLikeBirds?sk=info.
I recently spoke with Michal Franzino(guitarist), Ben Wiacek (guitarist) and Joe Arrington(drummer) about the release, Conversation Piece, and how it came together…
Cliche one, how did this project begin? How did you guys develop your experimental sound?
Franzino: this project started in early 2009 when butter and I realized that all the musicians we were playing with at the time had moved away (or weren't working out for what we wanted to go for) and decided to do it all ourselves. The initial idea was simply to make the record I had always wanted to make, one where I could do any/all ideas I had without regard for how many tracks were being laid down, how impossible it was to play, how many people were involved, or if it were too weird. That record came to be Plan B and led us to the rest of our members. The band today is the manifestation of our efforts to create a solid record with a solid line-up that we can also take on the road. 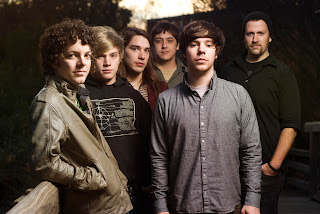 How did Kurt get involved with the project?
Franzino: We played a show with La Dispute almost exactly a year ago that Kurt had showed up to. Butter and I had really dug what Kurt did with prog band O! the Joy, and thought he might have something cool to offer as a guest on a track in the future, so I approached him and asked. He told us he was interested, and eventually, a mutual friend of ours ended up just asking him "Why don't you just join their band?" We all jammed one night, had a bunch in common/liked what we heard, and just continued playing music.
Your latest release, Conversation Piece(released October 11th), has gotten some solid reviews thus far. Are you guys surprised by the reactions thus far?
Wiacek:  Yeah, it's been absolutely mind blowing. The response so far has been extremely positive. It's super flattering, I don't think we ever imagined people liking the CD this much. We definitely had high hopes, and considering how much faith we had to put in to the project we knew we had to make it good. Our lives pretty much depend on the success of this band. So I'm pretty stoked it's receiving such high praise. Plus, our fans are pretty crazy, so I'd expect them to be going extra crazy when the CD finally came out.
How did the writing pan out for this album, in comparison to Plan B?
Franzino : There are several huge differences. I think the biggest one, besides what has already been mentioned, is that Plan B was written over the course of years and recorded at our leisure for 9 months, while this record was laid down in 3 weeks (typically bands working with kris do full lengths in closer to a month and a half) and written with a deadline. This means we didn't have time for a lot of the little subtleties and character of the first record, but it pushed us to make the music strong enough to stand without it. Also, as Plan B was primarily an instrumental album, the music was a lot more busy and in your face to keep it interesting, where-as this record it was intended to be a tasteful avenue for Cory and Kurt. Finally, Conversation Piece was written with a real drummer, and actual solid members who all had a say and their own flavor to add this time around, instead of me basically hiring session musicians.
How does a song normally come together for you guys?
Arrington: Believe it or not, we will play our instruments for hours on end in a dark studio with a silent film projecting on the wall. We extract melodies from what we see... An audible extension of what we feel when we watch the imagery in these movies (David Lynch films among others). Provided that we adequately document these melodies, we use them in songs. Songs can start from a drum groove and build with layers, or they can begin as a rough conceptual structure and grow into a larger picture. We'd like to think that each of our songs, as crazy as they may seem to some, do have a "cerebral cortex" so to speak, and the song as a whole included extensions and melodic networks of these initial ideas. Also, Mega Man. 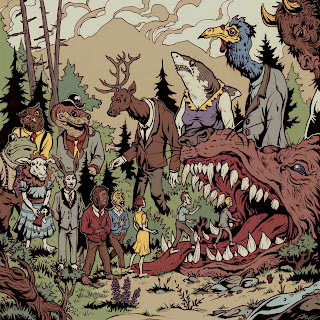 Specifically, how did "Sesame Street Is No Place for Me," come together?
Franzino: This song changed Many times in the course of its creation. The main riff came out in one the jam sessions Joe and I did while watching/trying write our own score to several different movies/images on a projector. I believe it's what came out when we watched Tom and Jerry (laughs). The demo version of it I did when it originally written has a very video game-y verse to it, it’s pretty funny, that will be released when we send out all the Kickstarter rewards. This song is actually my least favorite musically on the record, the band had to really convince me to keep it.
Did you have a direction in mind, before you began writing/recording?
Franzino: As stated previously, the mission for this record was to write something that could truly stand on its own musically with just two guitars, a bass, and drums. Truth be told, it is actually easier for me to write when I have a large array of instruments before me to perform the parts, dynamics and cool tones can be achieved by just switching focus to different musicians. I have never been a huge fan of the guitar as an instrument so it was a real challenge to find ways to keep writing with it interesting.
You guys seem to successfully combine a number of diverse sounds/genres in this record. Is that intentional? Is it ever a challenge?
Arrington: Intentional, yes. A challenge, yes. All for the greater good of getting our creative juices flowing. Our band is not only diverse musically, but the members themselves include everything from extremely inspired natural players to well-studied, diverse, reading musicians and many in between. This creates bonds that transcend normal band ties. This, I'm sure, has a lot to do with how broad our musical tastes are in this band. The cohesion that exists in my laying down a Songo-Baiao on the drum set and having everyone play creative, chaotic, and tension-building melodies layering above it is quite an experience. We've always liked toying with every sound and genre and will continue to do so in the future. What the listener does not witness, is how many of these crazy ideas DO NOT work at some point and have to be scrapped or re-written... But that's for the birds. And the process is worth it regardless. Our next record is sure to be packed with Opera and Polka songs.
Listening back to the record, could you hear any specific influences? Any specific bands/artists come to mind?
Wiacek: Oh yeah, there are a few parts here and there where I noticed certain sounds that remind me of a few bands. Kurt has some vocal parts in Think Dirty Out Loud that remind me of Robert Plant. Cory harnesses some Dr. Dre or something during a part in Truly Random Code. In other songs I'll hear musical influences anywhere from Rage Against The Machine to Radiohead, Refused, The Bled, Foo Fighters, Blood Brothers, Pink Floyd, and a plethora of other influences that wouldn't really be necessary for me to list... It'd be impossible to ignore the sounds that remind me of my favorite artists because they're the ones who inspired me (us) to do what I (we) do.
Were there any songs on the record that surprised you with how they turned out specifically?
Franzino: I think the thing we were all most surprised about was more the reaction to a specific song than how it turned out. Vanity's Fair was written fairly early on it the process, and all of us enjoyed it well enough, but definitely did not expect it to be the crowd favorite. We were all pretty convinced Orange Time Machines Care and The Blowtorch is Applied to the Sugar would take the cake. I guess that's just how the musician vs. the audience works, we value different things. 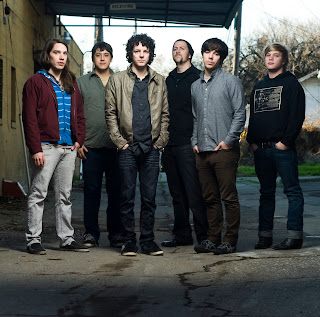 How did you guys land on working with Kris Crummet? What did he specifically bring to the table?
Franzino: Well Kurt had worked with him twice already/felt very comfortable with him, and all of us enjoyed the production on several albums in his catalog, so he was a natural candidate. At the time he was being managed by The Artery Foundation, which is also our MGMT, so that really helped in making it happen. Kris has the best ear I have ever come across, he just understands exactly what you are going for, and it’s uncanny. Most of us had never worked with someone who could really produce, so it was very interesting/beneficial how his opinion swayed tones, and what we got out of a take, and which effects were appropriate/how much. He and Kurt worked especially well together, as Kurt writes a lot of his melodies in the studio, he was very good at encouraging him and keeping him on track. Lastly, I think it was really good having a non-biased, knowledgeable opinion in the room when little disputes over how something was to be performed would happen.
What can people expect when they come to see one of your live shows?
Franzino: We really just want to give people our most honest performance possible. We try to make sure the only thing we have rehearsed is our music, and for whatever happens every night to be inspired by the moment. You can expect for schizophrenic, chaotic moments of in your face walls of sound, and minutes later find us gently painting an ambient soundscape. You can always count on us showing up sore and leaving sorer.
What do you guys have coming up next? Touring? After touring?
Franzino :There are two tours currently being worked out that we can't announce yet/aren't set in stone, but we are trying to get one as soon as possible to promote the record and then something in spring. We aim to stay out on tour/playing festivals as much as humanly possible for the next 8-12 months, all the while writing new material. We are all already anxious to write a new record.
Perfect day, driving with the windows down, what are you listening to?
Franzino: My taste by no means represents the whole bands, but personally I've been jamming the new Russian Circles, Giraffes? Giraffes!, and an artist called Kimbra lately. Classic go to bands also include: Paul Baribeau, Damien Rice, The Frames, and Pedro the Lion. If its a perfect day driving to the next date on tour, we are listening to the likes of Blakfish, Mew, Refused, or Rolo Tomassi

Posted by Mousertime Music And Stuff at 9:58 PM