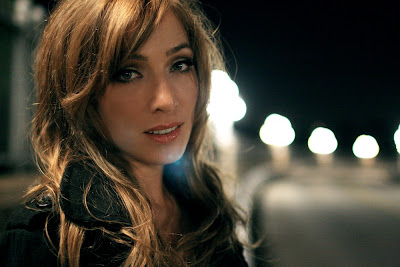 After three years of anticipation, singer/songwriter Kyler England has  delivered an incredible album, Electric Hum, that perfectly combines organic and synthetic sounds. This approach has allowed England to carve a niche in the vast singer/songwriting world, and promises to leave no one disappointed. Recently I had the chance to ask the Rescues member, some questions pertaining to her latest release, which was funded via the increasingly popular fundraising site PledgeMusic.com. For further information, or to check to latest news regading England, please see the links posted below!
http://www.kylerengland.com/, www.therescues.com,www.pledgemusic.com/projects/kylerengland
I haven't seen you perform live before, so what would you say fans can expect to see when they come to one of your shows?
England: At my live shows on my east coast tour and on my upcoming California shows I will be recreating the electronic meets organic sound on the songs of my new album, Electric Hum, along with a few old songs in a more acoustic singer-songwriter vein.
Who are some people that you have looked up to in the past in regards to stage presence and live performance?
England: Foo Fighters really impressed me a few years ago opening for The Police.  They held their own amongst legends and put on one of the tightest shows I've ever seen.  Adele stole my heart earlier this summer by making me, and several other thousand people at The Greek Theater, feel like she was singing just for me.  My friend Edie Carey, and indie singer-songwriter out of Chicago, always moves me with her grace and humor.
When did you begin working on your new record, Electric Hum (due out October 25th)? Was there anything specific that sparked the creative process for the album?
England: I wrote the first song for it in January of this year.  I was driving home late in the day, headed east and the sun was setting on the mountains...something about the angle of the light inspired me and suddenly ideas were pouring in.  The verse of "Eye of Your Storm"  came to me, almost complete.  As soon as I got home I sat down at my piano and finished the song.  The floodgates opened after that one. I started recording in the spring and finished the record up in August so the entire record was made from songwriting to recording to mastering in about 8 months.
How did the song writing pan out for Electric Hum
England: Because the last few years I've been really busy with my band The Rescues, I hadn't written anything for myself to sing for my solo project in ages.  So when I started writing it was like I had a backlog of songs waiting to come out.  Most of the songs came really naturally because I had things I needed to say.  The writing process was really joyful for this record.
Are you someone who writes continually or periodically?
England: I write continually but often it's cowriting with other people for their projects or to pitch for a specific purpose in mind.  As far as songs for myself to sing I only really write when I'm inspired so it varies.
Before recording/writing this album, did you have a musical direction in mind?
England: During the writing process I realized I was writing a different kind of record than I'd made before.  I wrote all the songs on keys and a lot of them to drum loops so that was already really different from my previous process.  But I also was feeling inspired by the collaborations with DJs that I've done over the last couple of years, some under my name and some under my alter ego name, Relyk (Kyler backwards).  I discovered my voice takes on a whole different personality when surrounded by electronic instruments.  So for this album I decided to explore the tension between organic and electronic elements. I'm also a big fan of electronica artists like Imogen Heap, Ellie Goulding and The Postal Service.
How did you get hooked up with Pledge Music for the funding of Electric Hum?
England: I had heard of Pledge and Kickstarter and had done my own DIY campaigns for previous records.  I happen to have a friend who works at Pledge who shepherded me through the whole process.  They're an amazing company and their platform is the wave of the future...connecting fans directly with the artists they love.
How important is social networking for an artist like you?
England: Social networking is more and more important all the time.  It's very hard to keep up with all the sites that matter.  It's a juggling act to balance communicating with fans online and spending time writing songs and making music...the things I love the most!
Are you currently working on any new material with The Rescues?
England: We're working on a new album this fall, it will probably be out early 2012.
What do you have coming up after this solo tour?
England: In addition to working on The Rescues' album I have some collaborations with DJs coming up.  I'll also be doing a number of dates on the west coast.  And catching up on some cuddling with my cats!
Perfect day, driving in your car with the windows down, what are you listening to?
England: Peter Gabriel's "So".
Posted by Mousertime Music And Stuff at 10:14 PM