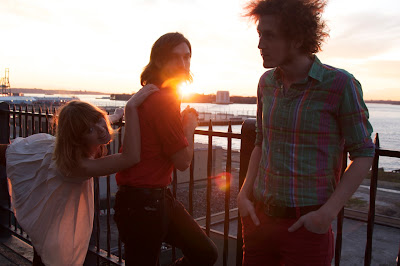 I had a chance to see these guys (and lady) in ATL at the Vinyl recently and they put on a very entertaining show. The trio, made up of James Cleare, Heather Robb and James Smith, each took turns singing and switching up instruments every few songs which I highly respect. Their newest release,"Would Things Be Different", is one of my favorites right now. It is such a diverse album filled with elements of folk, country, bluegrass and rock you would think someone had made you a mix tape! Their flawless three-part harmonies throughout the album gave me chills, of course. Check them out at http://thespringstandards.com/
Here is my interview with Heather Robb:

I had a chance to see you guys in ATL recently and you all seem to have a great amount of chemistry, almost as if you have known each other forever... How long have you guys been together exactly?
We have known each other for a very long time, we started singing together when we were 15 and have played in bands together on and off for the last ten years. So even though the Spring Standards have only been together for 2.5 years, the 3 of us have been making music together for most of our lives. We definitely learned a lot from each other and developed our own way of doing things at a young age, and that's a huge part of the foundation of the band.
How are Spring Standards songs normally written?
We're all songwriters so typically one of us will bring a song to the group and the 3 of us will arrange it together. It's very collaborative, and our shared background plays a big role in the way we write and arrange our music.
Can you tell me a little about the inspiration behind your new full-length "Would Things Be Different"...
Hmmm... Well the inspirations are all over the place - that's part of why every track is so unique. Each song comes from a very specific place and represents its own idea and contribution to the record as a whole. We definitely wanted to embrace that diversity of sound and let each song stand on its own rather than committing the entire record to just one mood or style.
What was the inspiration behind "Unravel and Unwind"?
'Unravel unwind' tells a very simple story, of 2 people who have been in each other's lives through many changes and challenges. It's a song about friendship and forgiveness and being hopeful that the love between people can be stronger than anything that might threaten to come between them. More than anything it's a song about the importance of honesty.
When I went to import "Would Things Be Different" in to my computer, I noticed that the genre is listed as "Unclassifiable." You definitely have such a diverse sound, how would you say this was achieved?
The diversity of our sound wasn't something we had to work to accomplish actually - it's just happened naturally and we haven't done anything to stop it. I think a lot of times bands think they have to stick to just one sound, but we've never felt that way. We approach each song with a blank slate and know that as long as its coming from an honest place inside us, it's going to sound like us.
Who are some of your major influences?
This list could easily make up your entire article. I'll keep it simple and just say everyone.
How important is it for artists to develop relationships when playing gigs?
I think an artist's relationship with their audience is the most important part of playing gigs. If you're not connecting with your audience then you might as well be a CD in a boom box. The gift of live music in the opportunity to connect with people who are listening to you pour your heart out and feel their support giving you the courage to go even deeper and disclose even more.
How important is social media for artists?
Completely essential, now more than ever. It can be a lot of work keeping up with all of it, but it's such a great tool for independent musicians in particular and it's definitely worth the hard work!
Any advice for artists just starting up?
Just be yourself and do what you do and your audience will find you. Don't wait for some vague, romanticized idea of "success" to make you happy, find happiness in the challenges and struggles because they're going to be your fondest memories someday.

Posted by Mousertime Music And Stuff at 6:32 PM