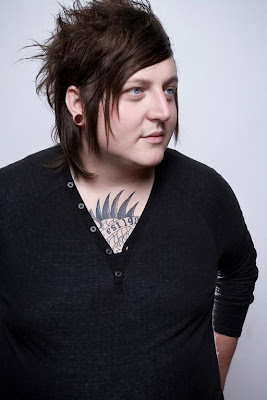 One day I was surfing the pop/rock section of iTunes and happen upon this guy. Caleb Denison's stripped sound catchy melodies and (mostly) soft vocals had me hooked immediately. After some further digging on this guy I realized how diverse of a musician he really is. On top of his solo act, he is also the guitarist for The Shout (Never Shout Never) and Christofer Drew's venture into hardcore, eatmewhileimhot! Check this guy out!

I am a big fan of "the Denison EP"... What was the inspiration behind it?
Denison:I just wanted to make a raw ep. Pretty much stripped down to piano, acoustic, drums, bass... Etc.
Had a great time on that record seeing how stripped down I could make it.
You are apart of several different projects that seem to be completely different. I am just curious who some of your biggest influences are.
Biggest influences would be growing up listening to huge amounts of gospel. Later I discovered bands like Queen, ELO, CCR, then newer bands like Blindside, RATM, and Recover. I think that's the reason why I can write in diverse genre's. I grew up, fortunately, with people putting good music in my hands.
I read that you are recording for a new E.P. due out later the summer/early fall. What will make this E.P. stand out from other recordings/projects that you have been apart of?
This new EP has been a blast to record. The best way to describe it is futuristic-retro I think. It essentially is a rock record, but filled with brass sections, choirs, and other surprises.
It will be released in August, and I'm super pumped for everyone to hear it!
How important is social media interaction for you as an artist?
At this point for any band or artist, social media interaction is super important. Internet is the new music industry, or quickly becoming so. Unfortunately, I'm not super great at it.. But I give it my best shot!
Craziest/funniest moment on tour ever...
That would have to be at the house of blues in Boston. (Laughs) seriously, stepping on stage, my pants ripped all the way down the front. Obviously, there was no turning back. Luckily my guitar tech Big Kat had a ready supply of tape on hand. We spent the first two songs with me playing guitar and him taping my clothes back together!
Maybe that should be filed under most awkward moment on tour..
Solo tour soon?
I will be touring early next year. Can't say too much about it yet, but it will be a really fun tour!

Posted by Mousertime Music And Stuff at 3:50 PM