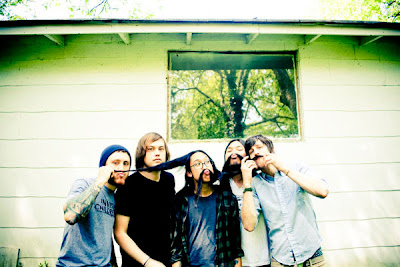 I recently had the pleasure of seeing O'Brother in concert along with Thrice and Manchester Orchestra. I had been listening to them for a while now but never realized this group is not only awesome, but they rep ATL. They have recently released a split EP on vinyl which is fantastic. Catch them on t our soon with Deas Vail in June, or make the trip to Cornerstone and watch them tear up the stage. Thanks goes to the Great Anton (anton dang,bass player and founding member) for taking some time out to talk with me...

How did O'Brother come into existence? How long have you guys been together?
O'brother started when mine and Johnny's old pop punk band broke up. We just wanted to start playing songs that sounded like the bands that we started getting into at that time. Bands like Colour Revolt, mewithoutYou, and Appleseed Cast. So O' brother started in late 2005 and our old singer left in 2007, found our singer, Tanner, and our third guitarist, Aaron, in 2008 and have been working hard ever since.
How did you get hooked up with Favorite Gentlemen Records?
O'Brother has been friends with Manchester Orchestra for a few years and when Andy and Jeremiah mentioned something about starting up a community based label back when we were a four piece, they wanted us to be a part of it and we agreed.
Can you tell me the inspiration behind your EP "The Death of Day."
We wanted to release something that was as close to a complete thought as we can. So it naturally turned into a concept record. Most of the songs have the same dark under tone and similar themes and refer to sleep and dreams and what not.
I'm a big fan of "Providence", can you tell me the story behind that?
Providence came from a sort of dream/daydream Tanner had after falling asleep at this church he went to. He thought that most of the people there were hypocritical and and only there for the social interaction, but realized that he had no basis for judging them because he himself was a hypocrite. So the conclusion was that he was just as wrong as everyone else. In fact, the only thing that is certain is that everyone is wrong, but being wrong is sort of the point.
How would you guys normally approach the writing process of a song?
We don't have a normal process for song writing, it's been pretty different every time. We're still trying to figure it out. Sometimes Johnny will write a riff and we'll build off of that, sometimes Tanner or Aaron has a whole song written out and will bring it to the band, sometimes we don't have anything and just jam for a while until it starts sounding good.
Any plans for a full length soon? Currently writing/recording?
We're hoping for an early 2011 release. We've already started writing songs and now we're trying to find a cabin somewhere and just go out there for a few days with nothing to do except writing. We'll see how it works out for us.
How is the tour with Manchester Orchestra and Thrice going so far?
It was going really great for us, but unfortunately it was cut short due to dire family emergencies. Please keep Dustin's father and family in your thoughts and prayers.
So what's next for O'Brother?
We're going out with some friends of ours, Deas Vail, in June. We'll be playing Cornerstone this year. Afterwards, we plan to write, record and continue touring like we have been.
Posted by Mousertime Music And Stuff at 8:46 PM