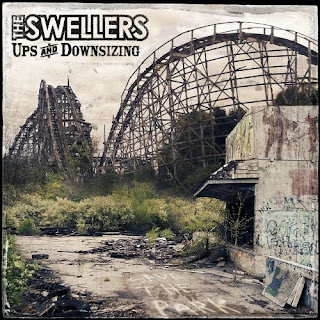 I recently went to see Motion City Soundtrack at the Masquerade and was completely taken away by the opening act, The Swellers. I had read some really good things about this band in their amazing review by AP magazine, but it still did not do them the justice that they deserve. There performance was filled with such energy, reminiscent of legendary punk bands like NOFX and MXPX. The lead singer's voice was punk, yet very melodic. I highly recommend seeing these guys in concert and picking up their newest album "Ups and Downsizing." I had the honor of speaking with their front man Nick Diener about the new album, their history and upcoming European tour...

So you guys are from Flint Michigan, how is the music scene there?
Nick:It was seriously great from our inception in 2002 till around 2006. It seemed to have died with the loss of the all ages music venue there,the Flint Local 432.
How long have the Swellers been together?
Nick: Almost eight years now.
Was the band chemistry immediate, or did it take some time?
Nick: Since the core members are my brother and myself, we have always had pretty good chemistry and can read each other well. Our other members have adapted to our style, though, and its a great fit.
I heard you immediately started recording demos after playing a few times, is that correct?
Nick: We recorded a demo after four days of being a band. Played our first show five days after that. Got right down to business!
I recently saw you in concert and you have amazing stage presence. Who are some performers that the Swellers have modeled themselves after/ been inspired by?
Nick: Bands like Weezer, Foo Fighters, and the Get Up Kids were all huge inspirations for me. Punk bands like NOFX and No Use really helped us figure out our live show. A Wilhelm Scream, too.
Can you tell me a little about the upcoming over seas tour?
Nick: All we know is we are playing some big shows with some really big bands like AFI and Sum 41. It's our first time over there, too. Can't wait to check it out.
Is this the Swellers first time traveling abroad for touring purposes?
Nick: We have toured Japan once before. Three years ago. It was unreal.
How do the Swellers normally write music?
Nick: My brother Jonathan, our drummer, and I write everything. Music first,then arrangement, then lyrics.
What inspires you to write a song?
Nick: It just happens. We are a band, so it's our job. Its all we do.
Are you currently writing and recording for the next record?
Nick:Writing a ton. Can't wait to hit the studio, but that wont be for another year maybe.
How has it been having such well respected/critically acclaimed album this past year(Ups and Downsizing)?
Nick:We had no idea it'd be this well received, or that it'd be coming out on Fueled By Ramen. Very thankful for both.
Any particular favorites on "Ups and Downsizing"?
Nick: I think my favorite songs are Do You Feel Better Yet and Fire Away.
I saw that the Swellers are on the "Take Action! Volume 9" album, how did that come about?
Nick: It is something we have always wanted to be a part of. We got a hold of them and they were very into the idea of having us on the compilation.
Top five albums you are into right now...
Nick: All five of Nada Surf's albums. Or the first five Weezer albums.
Any advice for other hardworking honest bands trying to get signed?
Nick:Just make music. Make it sound good. Play it well live. Play live. Alot. Everywhere. Most importantly, don't suck.
Posted by Mousertime Music And Stuff at 8:06 PM