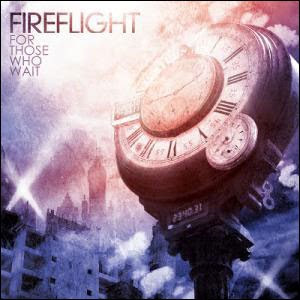 I have been a Fireflight fan since the first time I heard their crunching guitars mixed with uplifting lyrics at a listening station in a Christian bookstore... I had a chance to speak briefly with their lead singer Dawn Michele about the new album that was released in February, which helped them earn Dove Awards Nominations this year ...
Check them out at http://www.fireflightrock.com/ or follow them on Twitter at http://twitter.com/fireflightrock.
The new album, "For Those Who Wait", is fantastic. Can you briefly describe the inspiration behind this album?
We all have been in a time where we just had to wait, most of us are probably waiting for something right now. A lot of times when we have to wait we can feel so alone, For those who wait is about coming to find that its during those times of waiting that we draw closer to God and we learn that truly, we are never alone.
How do you guys normally approach the song writing process?
Its different with every song, but usually the guitarists come up with basic song structure, then I work to fit the melodies and lyrics I've been working on, and then we refine that until we feel like we've expressed it the best we can.
Who are some of you major influences, both musically and performance wise?
Steven Tyler from Aerosmith has always been an idol of mine, he has such a dynamic stage performance. The band has always been big fans of The Juliana Theory, Foo Fighters, and Skillet.
Any current bands you would advise others to listen to?
Red has some incredible stuff out right now.
I have always wondered where the name Fireflight derived from...
We made the name up about five minutes before our very first show for our youth group. Our youth pastor walked in and asked how we wanted to be introduced, and we realized we hadn't picked a name yet. I threw fireflight out there and it was the best anyone had at the time so we just went with it!
You all have been nominated for another Dove award. How does it feel to be recognised among your peers in this industry?
It feels incredible to be nominated for categories like Artist of the Year along side christian music giants whom we have looked up to from our youth! Pretty much like stepping into a dream.
Any specific specific spiritual advice or scripture that you would be willing to share?
God has really been teaching me a lot about faith lately, about how truly, your strength is not what's most important, all that really matters is God's strength and His abundant love for you.
So what is next on the list for Fireflight, after the long list concerts you all have planned?
Hopefully another long list of concerts!(laughs) We are moving into Summer Festival season and we greatly look forward to seeing all of fans again and meeting new ones!
Posted by Mousertime Music And Stuff at 5:46 PM