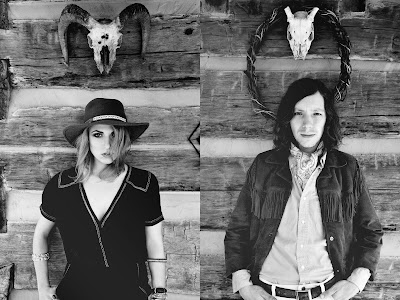 Once again, a great deal of good has come from poking around NoiseTrade.com. Back in October, I stumbled upon a beautiful song titled "Cold October,” by the newly formed duo, Escondido. Aside from the fact that the song paired perfectly with the month, Escondido's EP helped usher in a new season of songs/artists for me that have kept my heart warm this winter. Needless to say, I have been anticipating Escondido's full-length debut and last week Jessica Maros and Tyler James didn't disappoint. The Ghost of Escondido pairs sweeping melodies, floating riffs and uniquely beautiful harmonies, delivering a near perfect cinematic experience to listeners. Naturally I needed to know more, and Maros and James were more than willing to share how passionate they are about this project. Enjoy this refreshing interview and check them out at http://www.thebandescondido.com.

I would love to hear how you guys originally came together, both being solo artists, and decided to pursue a project together.

James: I was producing a recording for our mutual friend Leanne Ford. She invited Jess over for some group vocals.  I didn't really know Jess but she was sitting there strumming a song to herself quietly while everyone else was out of the room. I pushed record and added a little groove and fuzz bass and we both decided then we should make a record.  I always wanted to make a spaghetti western inspired record and Jess' vibe was perfect for it.
Maros: Yeah. It was a funny night. I pretty much felt sorry for myself and decided to sing a song. Luckily Tyler captured the moment and it turned into my dream track. He just tapped into this sound that I've always dreamed to create but could never find anyone that got it. I was never happy with my solo stuff and that’s why I never released anything, so I was pretty excited that day.

Was there a specific moment, when you realized that what you guys were creating was special?

J: We were both really excited about it from the beginning. The very first pre-production demos we did turned out great and we knew they'd only get better once we brought a band in.  We complement each other really well.
M: Absolutely. The entire process was so easy. We had a blast working on this record. When there isn't pressure involved you are left with creative freedom to do whatever you want. That’s what we did. We didn't over think it. We let the song tell its own story.

Can you cite any specific musical influences on Escondido? The Ghost of Escondido seems to evoke a special feeling and imagery for me, which makes me curious to find out where this derived from?

J: My dad was a big Clint Eastwood fan and I always loved the music in hisWesterns.  Ennio Morricone and others bring such a great dynamic to the visual, from sweeping epic sad stuff to crazy psychedelic.  My bread and butter is 60s & 70s songwriters so there's a lot of Neil Young, Paul Simon, Tom Petty, Joni Mitchell in there as well.
M: To add to what Tyler mentioned, I love Quentin Tarentino. I'm a huge Nancy Sinatra fan. Her song "Bang Bang" really started my obsession with that sound.

How has the writing process panned out for you all thus far, specifically in regards to The Ghost of Escondido? 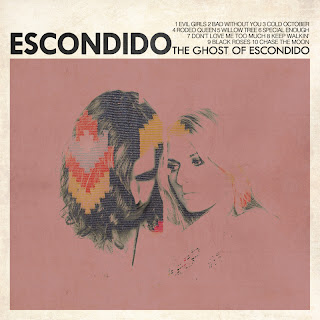 J: It works best when Jess starts the song and I finish it.  Sometimes I’ll write a new chorus or verse or lyrics but other times it's perfect on arrival.  She keeps her stuff simple and I often make something too complex so together it balances out.  Our friend Leanne Ford is a poet and we've used a lot of her imagery to start the lyric process as well.
M: Writing is therapy for me. I write every morning before I start my day. Mostly melodies, when we started this project I must have sent Tyler a good 100 songs. I like how we work because he has the ability to edit my ideas and make them better.

Do any of the songs on the record date pre-Escondido? If so, how far back?

J: Yeah a lot of the record Jess started writing a long time ago. I’ll let her speak to that.  There's also some stuff I hadn't used on my solo records... the chorus to "Cold October" was from an old demo I hadn't released yet.
M: Most of these songs I had written and had in my inbox for years. I could never show them to anyone because I lived in a world where everyone wrote songs and really good ones at that. I felt insecure about them...they were never considered 'hits' among my crew. So I thought they had no place, no home, just my inbox. :)

Did you make the conscious decision to record the album live in one day, to capture a certain sound and moment? What sparked this decision?

J: We wanted to do it quick so we could capture a moment and not second guess ourselves. We spent a couple of solid months arranging the songs and doing pre-production so we could pull it off.  Most of my favorite records are pretty spontaneous.
M: Financially it was great as well.  I don't know what we were thinking. I don't think anyone believed it could be possible. Our band couldn't even believe that we had pulled it off. I think we were really prepared and knew what we wanted. Sometimes it’s good not to think about things too much and let it speak for itself. There’s beauty in flaws.

I see that you all have some shows quickly approaching. Do you find yourselves performing in a different light as Escondido?

J: I LOVE playing as Escondido 'cause the lead singer weight is off my shoulders and I’m not stuck behind a piano.  I get to run around with a guitar and sing duet stuff.
M: Oh yes! I get to bicker with someone else on stage. Its nice to have the company and harmonies and we just have a blast up there. Tyler makes everyone laugh and i make everyone cry.

Cliché one... what is the story behind the name Escondido?

J: I just liked the southwestern aesthetic of it... it's not really connected to its translation or the city in southern California.  I had it a few years back and was saving it for a band like this one.
M: It’s pretty boring I know but we just liked the name. Even when you say it it makes you want to go to the desert.

How was the Daytrotter experience for you all? Was it your first time?

J: Huge respect for the folks at Daytrotter. Its founder Sean Moeller is the sweetest guy ever and a really talented writer (and he's a fellow Iowan). The recording engineers were top notch and our session felt amazing... wish we could put it out on vinyl.
M: It was a first time for me. Honestly, it felt like we did our record all over again. The live setting is the best.

J: Tom Petty "You Don't Know How it Feels", Rolling Stones "Brown Sugar", Shuggie Otis "Inspiration Information". When I’m in California it's always The Beach Boys.
M: Dylan..."Lay Lady Lay"..........Jimi Hendrix- "Little Wing".........and if I want to rock out with my girlfriends? Metric.

Posted by Mousertime Music And Stuff at 7:25 PM