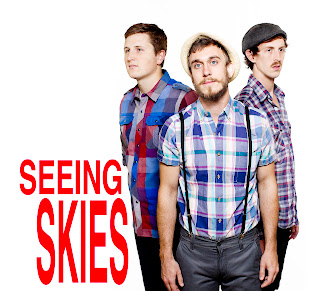 Check out my interview with Parke Cotrell of the indie band Seeing Skies, out of Knoxville TN. Also click here to hear their music:http://www.facebook.com/#!/seeingskies
What have you guys been up to lately?
Cottrell: Well, we just got done at the end of 2010 with our "Sofa Series" tour. We went on weekend runs to several different cities playing acoustic house shows for close friends, family and fans. It was really special, and the "Sofa Series" DVD is coming out hopefully very soon. we also recently snagged ourselves an awesome new drummer! his name's Josh and he's ballin'. we're writing new music for an EP to look out for in the coming 3 or 4 months as well.
Can you give a brief synopsis on how the Garret and Parke story began?
Cottrell: In 2007, Garrett and I started hanging out at a local espresso/gelato shop in our hometown of Knoxville, TN called De Colores. It soon became a second home. We would spend hours upon hours there daily just talking, writing, singing, meeting new people, creating games.In a nutshell, it was a big community. From our times at De Colores, lots of ideas were talked about and a ton of song ideas. So we the crafted a bunch of songs and took them to our good friend (producer Chad Robison) and we made a record called 'Wake Up & Wake Up!' under the name Seeing Skies. We played for two years with some good friends of ours and then parted ways at the end of the summer of 2010 which is when we started the "Sofa Series" tour.
Recording soon? Full length/EP in the works?
We are still in the process of writing new music, but yes. We are planning on coming out with an EP early summer of this year.
What are some differences(writing/recording), that you are seeing in comparison to your previous works? Cottrell: For starters we're taking a much more honest approach lyrically to our new music, as well as branching out from the sound we achieved on 'Wake Up & Wake Up!'. There are definitely tendencies that are reminiscent of older Seeing Skies music but it's definitely a new spin on our sound. It's a great blessing having nice recording equipment at my house, so when I get an idea I can just set up a mic and jot it down. Having the capabilities of recording on the spot is an incredibly helpful tool in writing. We are able to try out all sorts of tones and parts to see what fits and what doesn't.
How does the writing process normally pan out for you guys?
Cottrell: Most of the time writing consists of me having a general idea for a song and I go to Garrett, and then we revise/refine it together. Though there have been some really great songs that are just the brainchild of us both equally. Sometimes it starts with a lyric idea, or with a melodic idea but we always take the starting point and try out what feels most natural.
How would you say your faith impacts your music?
Cottrell: We're all Christians in the band, but a lot of people think that means that we've got some agenda that we want to impose on our listeners. We're a band. We have problems just like anyone else and we're just as helpless as anyone else in the world. But the hope we have in Jesus Christ is what drives us to live and to love and to craft excellent music, no matter what form it takes. When we make music we ask ourselves, 'why is this worth singing/playing? What am I trying to say; if anything?'
Is there anything that the Lord is really showing/teaching you right now that you would be willing to share?
Cottrell: If I can cop out with just putting one word: patience.
What would you like for people to take away, when listening to your music?
Cottrell: At the end of the day, we want people to walk away from our music with a sense of hope.
What can people expect to see/experience when they see you live?
Cottrell: A high energy performance of great rock music.
Who are some people that you have looked up to in the past in terms of stage presence and live performance?
Cottrell: MuteMath, Ben Folds, John Mayer, Switchfoot, Thrice. All have been huge influences to us as well as incredible performers. Garrett's music: Beatles, Cold War Kids, The strokes and Brett Dennen.
Are there are bands/musicians that you are really hooked on right now?
Cottrell: For me personally, I'm on an Elbow kick as well as going through all of Beethoven's symphonies.
What do you have coming up next? Any shows?
Cottrell: We're playing at MTSU's Wing Fling on April 9th, as well as looking towards booking from the Summer through the rest of 2011
Posted by Mousertime Music And Stuff at 3:15 PM