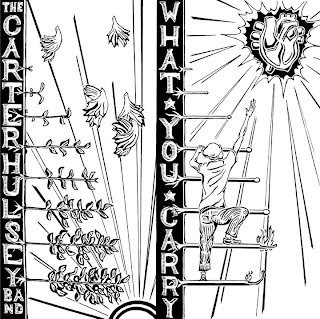 There is nothing quite like listening to a record on vinyl. The soft cracking sound filters through each song, providing each listener with a warming sense of comfort. In a time where technology has made listening to music increasingly accessible and mobile, the idea behind “the album” has gotten lost somewhere along the way. People used to buy albums in their entirety, allowing them marinate in the raw form it was intended. The Carter Hulsey Band understands that music fans should let their music roll over them. It is for this reason they are releasing their latest album, “What You Carry” on 12’’ vinyl, May 23rd (available on iTunes May 17th).

“What You Carry,” features the country/southern-rock sounds of Joplin, Missouri natives Carter Hulsey (vocal/guitar), Thom Hoglen (Bass), Isaac Duncan (Guitar),Tof Hoglen ( Keys) and Caleb Denison(Drums). While the overall sound may be classified as country, the band bounces around the genre creating a very diverse set of six songs. “There is a lot of variety in this album,” says Hulsey. “I don’t know if it is a good thing or a bad thing, but it seems to always happen when we record.” Hulsey’s previous release “A Note In Your Pocket,” also sported the same type of diverse track list, delivering songs ranging from country, rock, pop and folk. Hulsey commented further by adding, “Maybe we will find a style to stick with, or maybe we will keep being diverse!” “What You Carry” proved to also be the group’s most collaborative work to date, with half of the songs written by members other than Hulsey. “We each had something to add. We then just sat, collaborated and made it work for everybody,” states Hulsey.
The record begins with an upbeat track written by Hulsey, Duncan and Denison, called “Black My Lungs.” The song Hulsey’s lyrics seem to effortlessly pull memorable references for one main premise. “It’s about growing up, changing and realizing who you are and what that means. What it will mean for rest of your life.” Carter reveals the nature of the lines in the track derived from one of his favorite movies. “You are something that I am going to loose. The hole in my pocket carry walls through the yard,” refers to the 1994 film “The Shawshank Redemption” Tim Robbins character Andy Dufresne, daily picked away pieces of his cell wall and disposed of them through a hole in his pocket. “I have always loved that scene, it’s beautiful,” says Hulsey, “He is walking like a free man, in the yard of the prison.” Hulsey then goes on to explain that the title phrase, “Black My Lungs,” derived from a conversation that he had with Lovedrug vocalist via e-mail when he was fourteen. “A long, long time ago I loved the band Lovedrug. They had just broken up, so I wrote him because my band also broke up,” reveals Hulsey. “We were talking about how that all works out and at the end of the e-mail he said ‘and Carter, start drinking and smoking, it helps with everything’, which just stuck with me,” states Hulsey. He then goes on to explain “the phrase black my lungs comes from the fact that when you are going through difficult times, people seem to smoke because it is just a mind-numbing thing to do.”
“Let The Sunlight See Your Face Again,” is an inspirational tune penned by the group’s piano player Tof Hoglen that slightly forays into the pop/rock genre. Husley’s tone and wide vocal range seems to be a perfect match, while Tof Hoglen’s harmonies on the chorus add a special touch. The song’s catchy melody will surely have you humming the tune for the rest of the day.”What You Can’t Have” written by Thom Hoglen, features guitar riffs that seamlessly float through the entire song while sending a message to the listener about making peace and moving on.”You Don’t Wanna Hear It,” written by Hulsey, is an upbeat song that showcases his uncanny ability to take a small folk sound, and then build it into an anthem that is worthy of people singing it back at him. Thom Hoglen contributes the following song on the record, “Punchline” which has a slightly darker sound, and features standout performances by Duncan and Tof Hoglen. The old-school sounds keys of Holgen, paired with the haunting riffs that Duncan provides a very unique feel that is oddly catchy.
The last track on the record, “Everything Falls Apart” happens to be the most personal track on the record for Hulsey. The melody and music for the song were all based off of a dream he had in the middle of the night. “I was walking through the ghost level of the Nintendo 64 game, ‘Mario Kart Racing,’ and there were all of these women dressed as mice. As I am walking through this crowd of girls, there is a normal girl walking alongside of me. I turn to her and say ‘I wish you looked like that, ‘which was a ridiculous thing to say because all of the other girls looked like mice. As I was walking, the music and melody were just happening.” Hulsey awoke from the dream and immediately grabbed his music journal to jot down lyrics, while quickly humming the melody of the music he had just experienced. Hulsey shares that “the paper in my journal had turned to carbon copy paper. There was nothing to write on, there were just the black pages left. I then actually wake up and realize that I had still been dreaming!” Hulsey then explains “there is a lot of stuff in there that is real personal, but hopefully I mask it well enough to where its not that bad.” Lastly, the song also briefly explains how Hulsey feels about a lost art within music, “I feel like with a lot of the new music, the ‘romance’ of the music and of pen and paper is going away. I have seen a lot of music that is generated by people that are just trying to write songs, and producers that are sitting at a computer. I just miss the pen and paper aspect, where a guy just sits down with the guitar and talks about what is real to him.” 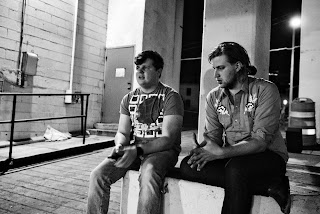 Posted by Mousertime Music And Stuff at 3:25 PM