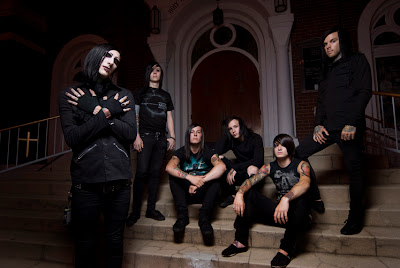 What would you say your latest release "Creatures" brought to the table, that your previous EP lacked?

I think "Creatures" is leaps and bounds ahead of our EP in every aspect. The EP was alright at the time and helped us gain a solid fanbase, but there was nothing on it that really stood out except a few catchy breakdowns and choruses. This new record is so much more in-depth. The music is much more aggressive and emotional. The lyrics are insanely personal and hold back nothing. It's just a product of evolution.
How did the writing process pan out for you guys? Was it done in-between stints on tours? On the road?
Fortunately, we had a lot of time at home for the writing of "Creatures" so most of it took place at home.
Your music on "Creatures" seems to be a combination of so many different sounds and genres. Who are some of the big musical influences behind this album?
Bleeding Through and Cradle Of Filth I would say are two of the biggest influences. We wanted to have the big epic symphonic feel to our music and both of those bands are prime examples of bands that do it best.
Could you please describe the inspirations for the songs "London In Terror" and "Abigail"? What was the concept behind your latest music video, "Abigail"?
"Abigail" the song and the video is about the Salem Witch Trials. The video is sort of a mix of "The Crucible" and a more modern feel of crime shows like "CSI." We blended them together to make things new while keeping the same story. "London In Terror" is about Jack The Ripper.
You guys seem to have a very strong fan base, what kind of advice would you have for a band starting up in terms of connecting to fans/crowd (both on and off stage)?
Be true to who you are and stop trying to be what you think is going to skyrocket your band to fame. Too many kids who start bands follow the examples they see some bigger bands doing and think that it's magically going to work for them. You need to find out who YOU are and work from there. Don't label yourself as a Christian band and start wearing V-necks and get your chest tattooed just because it worked for 200 other bands that are all exactly the same. It might get you signed and get you on tour with whatever band is big at that time.. but in a few months.. no one will care about you because the next band that ripped you off will be taking your spot. Do something that will get you fans who LOVE your band forever. Give them a reason to come back.
Where did the idea to let fans help in the writing process for the title track of your latest album come from? Were you pleased with the results?I wasn't only pleased, I was SHOCKED. It was amazing to get over 300 emails, 90% of these kids submitting lyrics that were all like mine - very personal and emotional. It made me feel like the stuff I'm writing about is actually going to reach kids and speak to them. I got the idea from 30 Second To Mars. They had fans sing on their record and since I couldnt do that, I tried to think of the next best thing and this was the idea I came up with.
Who are some guys that you have looked up to in the past as far as stage presence goes?
Morrissey is a huge one - he has this magical power to make your emotions run wild with his words and actions. I watch Morrissey and I could either actually laugh out loud or become really emotional, and that's true performer in my eyes. Someone that can cause you to react.
What is your favorite song to perform live, and why?
I like playing "Abigail" live because it has the best crowd reaction of any of the songs. Kids go insane every time.
Perfect day, driving with the windows down, what are you listening to?
The Smiths for sure. Put "The Queen Is Dead" record on and I'm good to drive for forever.
What is next for you guys, after this tour?
After this tour we are going out with a band called For Today and then we have some summer plans I can't mention yet... it's gonna be a big and busy year for us.
Posted by Mousertime Music And Stuff at 9:22 PM