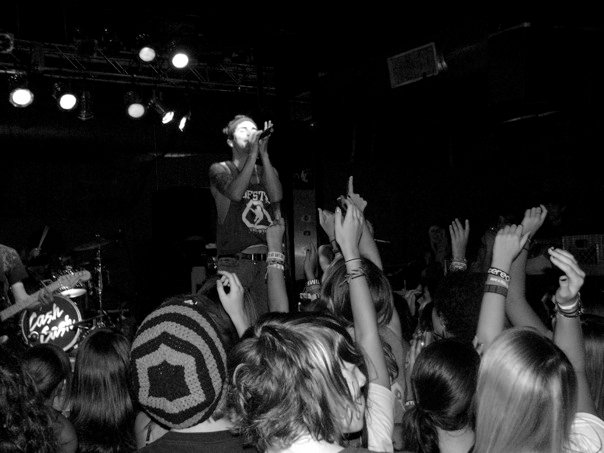 Photo by Kimberly Klaer
I recently had the chance to see Cash Cash in concert where they proceeded to completely take over, and tear the place apart. The crowd was completely enamored by the presence of Jean Paul Makhlouf and the rest of Cash Cash's high energy performance. Their catchy pop-rock sound covered in perfectly crafted synth beats will have you singing/dancing in front of the mirror in no time.

How has the tour gone so far? Make any new friends yet? Apparently Cady Groves and Sam are getting married...

Tour is going really well! The shows have been amazing and we’ve been having a lot of fun. We saw a live alligator in Florida which was nuts! Caught a bunch of frogs and lizards as well…we’re kind of animal freaks! As for Sam and cady…you’ll have to read his twitter to get any info on his personal life haha my lips are sealed! @samcashcash
You guys are currently in the works of recording a new record right?
We’ve been recording a ton of new songs. We have our latest single coming to iTunes later in the fall called Red Cup (I Fly Solo) ft. Lacey Schwimmer & Spose. It’s a crazy fresh jam that I can’t wait for you all to hear! It’s a fresh hyped party anthem that will be played at every party! It’s a fun party anthem that college kids can relate to as well as anyone who likes to get crazy!!Then after that hits iTunes we’re going to set plans to finish an album.
How did you guys approach the writing/recording process for this album? How was it a different process from "Take It to the Floor"?
We’ve just been trying a lot of new stuff. We’ve been using a ton of new synth sounds and drum samples. The new stuff is super fun and energetic like the old stuff but it has a more mature sound! It’s like Take It To The Floor = our high school experience & the new stuff were working on = college ha ha and in college you party harder and also grow up and mature a lot. So it’s got the best of both worlds!
How did you guys choose to cover "Forever Young" (which is way better than Jay-Z's version by the way)?
We decided to cover Forever Young because it has such an awesome theme that everyone can relate to! Everyone wants to stay young at heart and we thought our listeners would agree. We put our own twist to it and rewrote a bunch of the lyrics and made it more 2010! It goes over really well live and gets everyone singing and dancing. Come out to a show and see for yourself!
How was playing in Brazil? How did that come about? Have you traveled internationally before?
We’ve played internationally before on the Cobra Starship tour in the UK. That was an amazing tour but Brazil was insane! It was our first time playing Brazil and it was just such an amazing trip. We played a show in Rio and a show in Sao Paulo. We also got to play the equivalent of like MTV trl in Brazil. It was awesome they did a full feature of us for an hour! The trip went over so well that there are already talks about bringing u back there in the future! :fingers:crossed:
How did the whole Sonic video game thing come about?
Our management just got randomly hit up by one of the music directors for Sega who was looking for musicians to collaborate on for the upcoming video game Sonic Colors. It turned out his daughter was a huge cash cash fan and told him to check us out! We’ve been huge sonic fans since we were little kids so we freaked out and were like yeah we’ll do it! Anyways, it all worked out really well and we’re planning on doing a lot more work with sega in the future!
Random one... Perfect day, driving in your car with the windows down, what are you listening to?
Katy Perry's "Waking Up In Vegas."
What is next for you guys?
We’re finishing up the Stuck On Repeat Tour and then we’re gonna head home to finish recording/writing new material and hopefully we’ll be back on the road as quickly as winter!
Posted by Mousertime Music And Stuff at 9:25 PM