When I experience a particularly stressful day, one of my favorite things to do is throw myself into an online music wormhole. Clicking from band to band, jumping from genre to genre until a new sound catches my attention. When a productive wormhole experience occurs, not only do I feel less stressed, I look forward to the upcoming days and weeks as I champion around my latest mix tape hero.
The guys in Royal Forest have become favorites of mine, with their oddly beautiful soundscapes. The first song I heard of theirs, was "John Denver," a song that I found to be very catchy in a unique way. Mainly because when i was listening to the song, I felt as if I was in a plane that was quickly ascending and my ears were on the verge of popping. To my surprise, I looked up a description of the song and found out that the version I was listening to was recorded in a prop plane. Amazing. These guys not only write beautiful songs, but try to present them in original ways by capturing specific soundscapes.
For the latest info on Royal Forest, and to purchase their latest album Spillway,please check out republicoftheroyalforest.com/
Hope you enjoy my short interview with front man, Cody Ground. 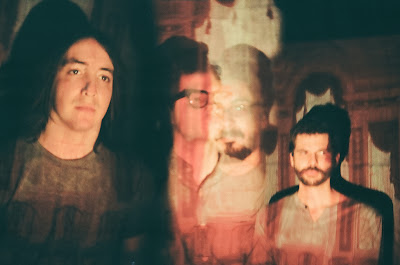 Cliche one, could you briefly explain what brought you guys together?

Ground: Erik and I met in Waco and played in some bands together. Then, we met Justin through a "drummer wanted" ad (he showed up with a pedal steel). Justin was recording one of our friend's projects at his studio when we met Blake.
From talking with other Austin-based bands, I've gathered that it is a fantastic place to develop music. What has your experience been?

G: Austin is a great city. There are a lot of good bands and venues and a real camaraderie in the music world.  It's also pretty isolated, tour wise, which makes it a challenge to try and get the word out about your music.

How long had you guys been working on "Spillway?" How far do some of the songs date back to?

G: We worked on Spillway off and on for around 2 years. The oldest song on the record is "On the Sun" and the newest song is "Everyone Who Knows You."
How does the writing process normally pan out for your guys?

G: We write songs as a band. It changes depending on the song. Sometimes it starts as a beat, riff, or sound and we build it from there. Then later, we'll deconstruct that piece and try to leave only the essential elements.

Who did you work with, when recording this record? What did they bring to the table?

G: Justin (our guitar player) recorded and engineered everything on the record. Justin is really good at getting the best performances out of the band. He's also able to create unique soundscapes and figure out how everything fits together by stripping deconstructing layers of sound we record.
I would love to hear the stories behind "John Denver" and "Black Hills," if you don't mind.

G: John Denver is written about a guy I grew up with.

Black Hills was inspired by a scene I saw out of my dad's truck window while we were driving on some backwoods roads on a family vacation.
Who are some guys you have looked up to in terms of live performance?

G: A lot bands put on a great live show - I just saw Yo La Tengo recently and they performed two completely different sets that were great. The Flaming Lips are the best at putting on an unforgettable live show that really engages the crowd. I think we're also inspired by art and trying to figure out a way to make our live shows interesting and original. Recently, we've been doing some live tape looping that involves the audience.

G: Lately, I've been listening a lot to "Tragic Songs of Life" by The Louvin Brothers. We also have sort of a pre show tour tradition of listening to Jaco Pastorius "Come on, Come Over" (http://youtu.be/PE6HmArln_k) when we're driving up to the venue.

Posted by Mousertime Music And Stuff at 1:04 PM