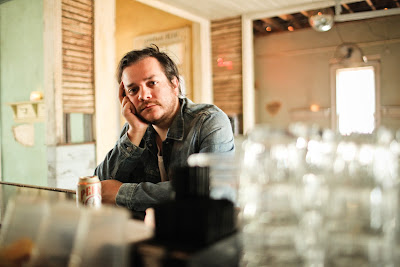 While attending a show several months ago at the Vinyl in Atlanta, I became an instant fan of David Ramirez. Standing alone onstage, bearing only an acoustic guitar and microphone Ramirez delivered one of my favorite performances ever. His rare, "country-tinged" sound paired perfectly with beautifully constructed melodies and brutally honest lyrics. His latest release, Apologies, has quickly become one of my favorite records of the year. One that I frequently play from front to back, in it's entirety, enjoying every second. Please check him out at http://www.davidramirezmusic.com/! Tour dates listed at the bottom...

Your latest record, Apologies, has received some great support in its debut week, even charting on iTunes! Has the success of the record thus far blown you away?
Yes, I've been very surprised at the success. It's a beautiful thing to create something I believe in and even more so to see people listen and connect. I never expect anyone to do so but when it happens I'm very thankful.
How long have you been working on Apologies? How far do some of the songs date back?
I think the oldest song on "Apologies" was written a year before going into the studio. I never know what songs are going to make an album until right before we record. I wasn't necessarily writing for "Apologies", I was just writing. The actual time spent working on the album was two weeks.
You recently stated that this was the most personal record that you have created thus far, and that tackling tough topics on the record was challenging for you. Did you intentionally invite the challenge to be more open?
That's a good question. And yes, I did. It's important to me to continually grow in my writing; not only with melody and turn of phrase but with content as well. There are many subjects on this album I had never before approached so it was important for me to give these things a shot.
Do you ever fear the songs on Apologies were maybe "too open?"
I did at first. I especially did before we released it. I would play the tracks over and over again and, at times, felt I said a little too much. Once released though, I saw and heard how deeply listeners were connecting and how, it seemed to me, most folks long for this honesty. I'm no longer afraid. I'm very comforted.
How did the songwriting process pan out for this record? Did you have a relatively set process, or did the songs just fall out of you at various times?
I try my hardest to sit down every day and write. No agendas, no timelines, just good old fashioned disciplined work. This doesn't always happen. Tours certainly get in the way of a consistent schedule but for the most part I try to write every day. "Apologies" was not really in the forefront of my mind. I just wanted to write what I thought were great songs. Once we scheduled studio time I really started thinking of what I wanted this next album to say. Some songs got cut/added a couple days before pre-production. We were pretty much down to the wire when it came to the final track list.
Do you consider yourself to be a continual writer, or are you more periodic (aiming to capture a certain moment/time frame)?
I'm a bit of both. Like I said before, I try to be more of a continual writer.
When performing these songs on stage, do you ever find yourself reliving the moments that they derived from as you sing?
Yes, that happens at times. 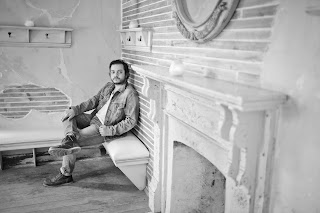 When approaching the recording process, did you have an overall sound/direction in mind before? Or did you just let it come together in the studio?
Most of what happened was discussed prior to hitting "record", however there were several moments, most of my favorite actually, that came together on the spot.
If you don't mind, I would love to briefly hear how "Stick Around," "Kindness" and "Mighty Fine" came together originally.
Stick Around: I was driving to San Louis Obisbo last year to play a small coffee shop and showed up incredibly early. I walked down to a neighboring bar, got a drink, and like many times before this, I sat alone in the back alley having a smoke. It hit me different on this particular afternoon though. I didn't know what I was doing, I had feelings of being a failure, and I couldn't help but think about my family and why I continually put so many miles between us.
I played the show for maybe ten people, got my $50, and then bar hopped alone until I was piss drunk.
I had never been more sad playing music in all my life.
This was the genesis of "Stick Around" although I didn't begin writing a word till a couple months after.
I haven't felt that way since but I think it was an important moment for me to go through. I needed to find the balance between "coming" and "going". I couldn't be that wanderer my whole life. I'm glad I went through it. It allowed me to see the rabbit hole I was in and slowly make my way back to the light.
"Kindness": I was driving around one afternoon and Dylan's "You're gonna make me lonesome when you go" came on the radio. I had this thought about how many of us have written about how sad we are to see a woman go so I said, "I'm going to write a tune about how, if a woman leaves me, she's just plain mean".
"Mighty Fine": We all have our quirks and insecurities. We've all suffered and fallen short. I think it's just a nice thought that there can exist someone in the world to put all that to ease.
Are there any major influences that you can hear, when you listen back to the record?
I hear a little bit of Ryan Adams in this album and I hear a little bit of Cash.
Perfect day, driving in your car with the windows down, what are you listening to?
Katy Perry "Teenage Dream". We can't always be heavy, right?