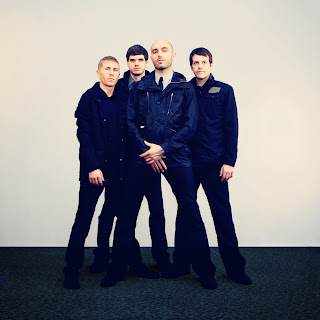 http://www.hiddenhospitals.com/
Cliché one to begin, where did the name Hidden Hospitals derive from?
It's an idea. It serves both functional and aesthetic purposes.
Hidden Hospitals:  Places revealed to those seeking resuscitation, rejuvenation, decompression, atonement? all manner of mental healing. They may be permanent or provisional - comprised of the elements, or divined during reverie. Be it a song or rooftop. A bus ride or a night in the woods. Faith or trust in another. Danced, read or walked. Swam, watched or wandered. Breathe.
Before creating this project, did you guys discuss a direction you wanted to take the music?
Not particularly the music, as much as the band. We all arrived at a chemistry after our ethics and personal goals for a "band" were aligned. The music does show a natural extension of that chemistry and alignment.
Could you possibly cite any specific influences on your sound?
Rock and roll is the anti-influence. We draw influence spanning from punk rock to early r&b, jazz to hip hop. It's not to say that you'll find a direct link from that to our recordings, unless you're able to identify ingredients one at a time from a mixing bowl of many.
Can you please describe the "addition by subtraction" method and how it applies to the orchestration of the record.
Many modern (and not so) records add so many sounds and technologies into their songs - thicken the canvas up with so much that each little idea becomes less identifiable. I'm guilty of this, myself. I've made recordings where all we did was add+add+add. This (to me) is great only if you're aware of each good idea that's going into the mix.  You lose the power of contrast (quiet defines loud).Addition by subtraction, in our case, is a much needed discipline. This is something that we can apply to this project that will keep us from "guessing" what else we can weave into a song.  I already have a knack for over-writing things, and eliminating the need to tweak sounds just because we can keeps us a lot more efficient in our progress. You can find this in the EP by noting that where we have additional instrumentation enter a song, we'll peel away something from our core (guitars/bass/drums/vocals). Sometimes a song calls for bringing the whole palette together - but most of the time, it diminishes another idea that could otherwise be shining.
How did the writing process pan out for you guys? How was it specifically different from other projects you have been involved in previously?
Being that this is a new project, we're just now applying this process. Each member has found a role, and assumes it well. EP001, I wrote in near completion before we got a chance to really explore writing ideas together as a band.  As a group (however) we refined EP001 to a far better state than where it began. This is something special that came to shine during the process of getting to know how to work with one another.
Recently, we've been exploring entire song ideas as a group and writing into them in a far more organic manner.  The outcome (to me, and I believe the entire group) has been more rewarding, and enjoyable.
What would you like for listeners to take away from EP 001?
Though a prototype, EP001 is very intentional. It represents us. Please hear it as a whole: A voice, a band, a small collection of songs.
What can people expect when they come to see you live? What would you like for them to take away from the show?
We feel that being on stage is a privilege, and is rarely recognized as such. People's time and attention is a gift…so people can expect to hear us express our appreciation. Somewhere between saying hello, thank you and goodbye you'll see us strum, croon and move to EP001 a little.
Who are some people that you have looked up to in the past in terms of live performance and stage presence?
Seeing Thrice play live was very inspiring. So collected, controlled, and their sound was nothing short of awesome.  I had never seen them perform until this past fall at the Metro in Chicago. Seeing that level of professionalism (in rock music) was necessary for me. They presented themselves very well, and seemed very aware of their opportunity being on stage in front of a sold out crowd. So many artists squander that opportunity. Queen, Michael Jackson, Prince, Al Green. More recently Mutemath, Mew, and the life-changing experience that was The Refused.
Any shows coming up?
02.03 Chicago, IL  //  02.17 Decatur, IL  //  02.29 Saginaw, MI  //  03.01
//  Kalamazoo, MI  //  04.27 Covington, KY
Perfect day, driving in your car with the windows down, what are you listening to?
Black Star(Mos Def & Talib Kweli).

Posted by Mousertime Music And Stuff at 10:47 AM