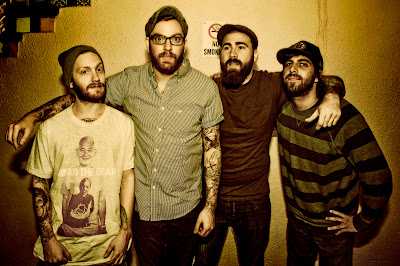 With the release of their latest album, In Some Way, Shape or Form, the former pop-punk outfit Four Year Strong decided to break out of their comfort zone, creating a record that they are truly proud while satisfying things the same time. I briefly spoke with Four Year Strong’s Alan Day (Vocalist/Guitarist) regarding the recent release and some of the changes they focused on.
fouryearstrongmusic.com


How has the tour been thus far?
Alan: It's been great we're just past the halfway point right now. It's been going great. We been having a ton of fun. All of the bands are great, and we been playing new songs which has been fun. It has been really exciting young tour.
Your new album In Some Way, Shape or Form, dropped in early November. How has the reception been thus far?
Alan: him, when we first released a couple of songs a while ago. The feedback was a little bit half-and-half, some people like them and some people didn't. We did go through a pretty big change, and we took a number of risks. Now that the record has come out, we've been noticing a lot more positive feedback for the record as a whole. I've read some reviews and it seems to be pretty good. We been playing the songs live, and they've been going over great live. Overall, it's going really well.
Going into the album to just kind of have a direction in mind before you actually started writing recording?
Alan: Yeah, I definitely think so. We knew that we wanted to change it up. I guess we didn't know exactly what the record was going to sound like but we wanted to do something new, something exciting, something out-of-the-box for us. So we had all of these big ideas, then we narrowed it down from some of the crazy ideas, from what it started to what it actually us. We just wanted to have some fun.
I've read a couple of interviews where you guys have listed specifically, that you wanted to break the mold with this record. What is the mold? Why did you guys want to break it?
Alan: well I guess the mold is really the way that we always sounded and things like that. Not because we didn’t like it anymore, or we’re not proud of what we've done the past. More than anything else we felt like we were stuck in a box creatively. There was really only so much we could do you, because there's only so much our friends knew. More than anything we just wanted to break out-of-the-box, and do whatever we wanted in a way that our fans would get, you know. In a way that still had that kind of energy and had that same kind of vibe that all of our music has always had. It's basically that kind of energy, that aggression, the melodies, the harmonies the tempo, all of those things that were always there. We just did it in a different way and showed this band in a different light, at a different angle that was always there but no one really ever got see
In making those changes, did you guys ever discuss becoming more of an overall rock group to give yourselves more longevity in the long run?
Alan: I guess in a way, but that wasn't the complete point of. It wasn't just “well, we want to make sure that we can keep doing this so we need to make the record this …” More than that, it was more like we want to keep doing this and if we are going to keep doing this, why don't we do it the way we wanted to it? So yeah, we just wrote songs that we want to write that didn't exactly fit the mold that we were in. We still have the same mindset writing these songs that we did when we were writing Rise Or Die Trying and Enemy of the World.
What were some changes that you guys made in terms of writing? Did you see any dramatic changes?
Alan: Yeah, there was a big change in the writing process. The way we used to write songs, we used to write all of the music and then write vocals on top of it. For example, on Enemy of the World, we had a couple of songs completely written, completely recorded and still didn't have any vocals written to them. Then we sang on top of what was there, and tried a bunch of different things until it worked. With this record, we were writing melody, lyrics, and music all at the same time, so they really fit with each other and worked together as a song. We were concentrating on a lot on the actual musicianship and the craft of writing this, as opposed to doing everything separate impacting everything on top each other, one after the other. Instead, we concentrated on making each song from beginning to end, like a real song.
Listening to the record, it seems to have it overall heavier/darker feel to it. Was that intended?
Alan: I think more it just kind of panned out that way. We definitely were looking to write some darker material, just because we haven't really done much of that in that's a side of Four Year Strong that has always been there, that no one has really seen or heard. Everything that we have written in the past has been more upbeat and I think that's part of why people like our band, but like I said before we just can't keep doing the same thing over and over again. We would be selling the fans short, as well as ourselves if that's what we did. 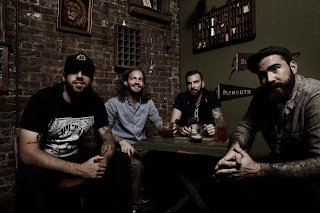 Did you guys ever feel tempted to change any of the songs to make “poppier?”
Alan: No, not really. Everything about making this record felt so natural and right, we just had such a good time doing I don't think we'll ever go back. The thing is, someone could read that, in think “oh no, Four Year Strong is never going to do something like their old stuff again!” I don't think that is necessarily case either. I just think the way that it was all done, we will never change. But like I said, the attitude of the band, the mindset that we have, and the place that we are creatively, physically we are still same band that we always were. We could very well write some happy, pop – punk type of song in the future. It's not out of the cards, but it's not where we’re at right now.
You mentioned this a little bit, but how would you respond to fans making comments like “I wish Four Year Strong would make an album like Enemy of the World again!"
Alan: same old thing. We would be selling ourselves and the fans short if we did the same thing over and over again. The reason we started playing music in the first place, because it's what we love to do. We started the band playing music that we thought we would like, and in the beginning we did it all for ourselves. Obviously, we care about our fans tremendously and we wouldn't be where we are now without them. But, at the end of the day that's what music is all about, trying new things, about expanding your horizon, it's about hearing new things, experimenting and trying to be the best that we can be.
How did the song “Heaven Wasn’t Built to Hold Me,” come together? Where did the lyrical inspiration for the song come from?
Alan: It’s kind of based behind organized religion and how some people push that on others, and it's not completely necessary. We just feel like they matter what you believe there's no reason to push your beliefs on okay someone; if it's not truly they care about. We've always had the mindset of “to each his own.” If you believe in something, that's great! But if you don't, that's fine too! That's kind of what that's all about. Musically when we wrote that song I think we were listening to a lot of Silverchair(laughs), so that's kind of where we got that. We just wanted a cool live song. We've never written a kind of slower tempo, song like that.

Posted by Mousertime Music And Stuff at 7:08 PM