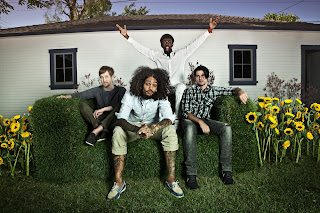 While on Warped Tour, I got a chance to speak with Gym Class Heroes guitarist, Disashi Lumumba-Kasongo, reagarding the tour, their forthcoming album and their hit single with Maroon 5's Adam Levine.

Disashi: Eric's got a band called Willing Swords, and it straight Metal, with growling. He actually works with our keyboard player Tyler Parcel and their stuff is available on iTunes. Matt has been doing some production here and there. people don't really know that Matt has a tone of production ability and ideas, which is really cool. My project is called Soul and it used to be called the Midnight Society. It is rock/pop and I sing and write almost all of the music. My fiance does some singing to, and some of the song writing as well. It's been awesome and I am going to be working on that more and more as the year progresses.
Posted by Mousertime Music And Stuff at 10:40 PM