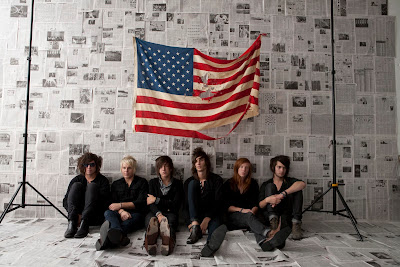 Since forming in early 2009 Detroit's, Rocky Loves Emily, has accomplished a great deal on their own accord. After playing self-booked tours across the nation, aimed to connect/re-connect with fans, the has released their latest Ep on Tooth and Nail records called "American Dream." While touring in the past, RLE made an effort to play as many Hot Topic "in-store" shows as possible, helping them continue to build a fanbase from the ground up. "American Dream" was released on November 23rd, and has generated quite the buzz. Check out their latest video, "Clueless," below!
Cliche one, how did you guys meet up originally?

We all kind of met randomly through local music, touring, and college. Not too crazy of a back story.
It seems as though this whole process, from the time you guys formed, to touring and signing with Tooth and Nail has been quick. When was the turning point where you guys realized that you were on to something?

It was definitely a quick moving process for us. I think we all knew from very early in the game that the band had potential, but I think it really hit us last March/April when we did our first National tour. That's when we met some amazing people at Tooth, really cool stuff was happening, and we all got stoked about our future.
How did you guys get hooked up with Tooth and Nail? What attracted you guys to them?
We met our A&R guy randomly at a Copeland show out in Seattle while we were on tour. We dropped a CD off at the Tooth headquarters and things started rolling from there. I think the only reason I was attracted to the label was because so many of my favorite bands are on T&N! haha. As Cities Burn, Emery, Showbread, He Is Legend, Underoath, August Burns Red, Anberlin, I could go on for hours but I'll stop.
You played a bunch of Hot Topic in stores, before being signed. How were they beneficial to your success as a band?
I think playing acoustic shows like that gives a band a really intimate setting to meet and hang out with kids. We created a great relationship with Hot Topic managers and employees too. A lot of wonderful people work at those stores.
Are you guys going to continue to do them on a regular basis?
Things change a little bit when you are a signed band, a little more red tape and all that jazz. But, we are going to try to do as many Hot Topics as we can in the future. We always love it.
How did you come about the exclusive album deal with Hot Topic?
We felt like it was kind of an obvious decision. We'd already built a great relationship with the company and they had done so much for us. We wanted to give back to them by putting our product on their shelves. So, our label sent out an offer to them and they agreed.
How do you guys approach the writing process normally?
Idealy, we like to go in the great Michigan woods, build fires, have Steve (our keyboard player) make some awesome burgers, sit around the campfire playing acoustic, and swap manly stories. Now that's inspiration.
What was the basic idea/inspiration behind "American Dream?"
Well most of the songs on the record are about girls. But you didn't hear that from me. The title track, American Dream, is basically our proclamation to the world. It's about us taking a risk doing what we love to do (i.e. driving around the country playing music). The bridge of the song wraps up the idea by challenging the listener to go do what they love to do. We all have an "American Dream", so go find out what yours is!
How was it working with Casey Bates?
Casey is the freakin' man. Casey has a giant movie projector in his house the size of an entire wall. We had "movie night" and watched Terminator. Do I need to say anything else?
How did working with Casey in Seattle transform you guys?
Wait, aside from watching Terminator? haha Let's see, Casey was the first "pro" producer we've worked with. So, I think working with him gave us a new understanding of what our band sounds like. It's weird hearing your songs for the first time at a pro level. We we're like "woah, is that us?"
What was the inspiration behind your new music video?
Me and Brandon (lead singer) actually brain-stormed up the idea while washing dishes. We we're just talking about funny ideas for a video and I was like "Dude" and he was like "Dude". The rest is history. We're inspirational people I suppose you could say.
Who are some bands you guys are really into right now?
Well I'll speak for myself on this one. Currently, I'm really into Nicki Minaj, The Summer Set, Led Zeppelin, and For Today. Such tasty jams! haha
Any bands you have looked up to in terms of live performance?
That's a really good question. We try to make our live performance really energetic. I think we look up to metal bands a lot for our stage presence. We do a lot of synchronized head banging, running in place, and jumping. I think We Came As Romans has pretty sick stage presence.
What do you guys have coming up next?
We actually just announced a tour that's running January 14th through February 16th with our good buds Set It Off. After that we'll be starting the writing process for our next record and probably another spring tour. After that, we plan to go triple platinum, tour with Lady GaGa, have a number 1 song on the top 40 charts, start our own reality show, etc. Just kidding about that entire sentence.

Posted by Mousertime Music And Stuff at 6:36 PM